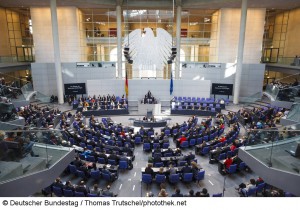 On Thursday this week, members of DSW’s all-parliamentary party group (APPG) of the Bundestag came together in Berlin to talk about the dreadful impact of “sexual violence in conflicts”. The high number of participants – in particular of MPs from the Green party – demonstrated the importance placed on the issue, and the concern of MPs around it. Karin Nordmeyer, chair of the Nationales Komitee Deutschland UN Women, provided profound insights into the enormous challenges as well as current political activities in the context of sexual violence.

London summit on violence against women

During an international summit that took place in London in mid-June, victims, politicians, military and legal experts, representatives of international organizations and scientists came together for four days in order to discuss how to tackle sexual violence in conflict situations. Thanks to charismatic women such as Hollywood star Angelina Jolie and Zainab Bangura, UN special representative on sexual violence, the summit received a lot of media attention and the topic was widely noted in the public sphere.

The London summit reinforced the fact that sexual violence is a weapon systematically used among warring parties to demoralize and to destroy societies. Although legally binding documents were not adopted, political leaders clearly expressed their commitment to end sexual violence and rallied behind the victims.

The German government is also committed to reduce the terrible impact of conflict on women and girls. In December 2013, Germany adopted a National Action Plan based on UN resolution 1325, a landmark agreement that for the first time recognized how conflict affected women and highlighted the key role they play in peace-building processes. It is, indeed, very logical that peace can only be sustainable, if the needs and rights of women and girls are respected.

During the meeting of the APPG it became very clear that one major challenge still needs to be addressed: in order to be able to bring rapists and war criminals to court, all forms of sexual violence need to be defined as “grave breaches” of the Geneva Conventions. It is here where all politicians fighting for the rights of women and girls and for sustainable conflict solutions should get involved.