EDCTP and the UK: A Little Known Success Story 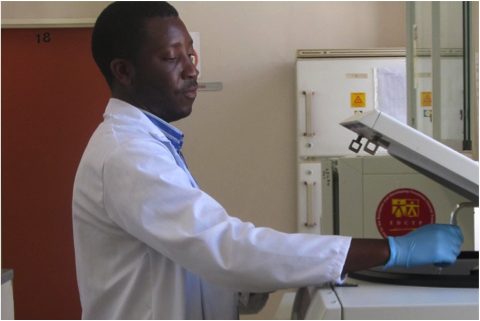 Occasionally we host guest editorials for partners and colleagues from across the global health community. To mark the launch of the #LetsSaveLives campaign – pushing for increased investment for global health R&D to fight diseases of poverty – today we are delighted to host a guest piece from Laura Boughey, Health Advocacy Co-ordinator at RESULTS UK, originally published here.

She profiles how EDCTP is a brilliant example of co-operation and investment by donor and developing country partners that has brought incredible rewards for both.

Every year, over four million lives are wasted due to just three diseases: HIV/AIDS, Tuberculosis and Malaria. Worse, these diseases impact the poorest people around the world hardest, holding back communities as they fight to live healthy and productive lives. EDCTP was formed in 2003 to accelerate the development of new and improved tools in the fight against these global killer diseases, so it was fitting that last week’s event in Parliament for EDCTP was chaired by Baroness Suttie, a Member of the All Party Parliamentary Group (APPG) on TB, whose inquiry and recently released report Dying for a Cure examines the barriers and opportunities to better research and development (R&D) in the fight against these diseases.

In the case of HIV/AIDS, our best efforts to scale up treatment have pushed us to a tipping point where, with new tools, we could win this fight. This would mean stopping the 2.3m new cases every year and the 1.6 million lives lost at the moment, and supporting the world’s 35million HIV positive people. For TB, of the 9 million people who will contract it every year, 3 million will not receive the correct diagnosis and treatment for their condition, and 1.5 million people will die from TB every year.We desperately need new tools to fight both the disease and the challenge posed by drug resistant strains, which at the moment requires drugs that cause disabling and permanent side effects including nerve pain, blindness and hearing loss.

EDCTP and the UK

Dr Mark Palmer, Chair of the EDCTP General Assembly (and UK representative to EDCTP as Director of International Strategy for the UK Medical Research Council) started off last week’s event. We heard how since its inception as a public-private partnership, EDCTP has brought together 16 European countries, 30 sub-Saharan African countries and 259 research institutions from across the world. It has seen 65 calls for proposals generate 246 projects worth over €380 million – split between work on HIV/AIDS (64 grants), Malaria (41 grants), TB (34 grants) and non-disease specific work, such as ethics strengthening (107 grants).

Half of the beauty of EDCTP is its co-ordination. An initial lack of studies progressing promising concepts from laboratory and small scale tests (Pre- and Phase I trials) to testing for safety and efficacy with large numbers of volunteers (Phase II and III) has been rectified through EDCTP’s commissioning. Such co-operation also ensures duplication can be avoided and knowledge is shared, and has seen potential products moved closer to registration and the final goal of bringing products to market.

Numerous successes have included HIV treatment guidelines and fixed dose formulations for weight-banded children, and the acceptance of microbicides (products absorbed via the vagina or rectum) as effective methods. Other studies have shown the MVVC malaria vaccine to be safe and efficacious, and have allowed the control of malaria in pregnancy; and for TB, trials of REMoxTB have confirmed the safety of moxifloxacin for use, and allowed the evaluation of simple, cheap point-of-care diagnostics.

The second secret of EDCTP’s success is its focus on the long term; prioritising African capacity-building and South-South collaboration, and pushing for an effective – and therefore global – response to global health issues.

EDCTP has created world-class research facilities across Africa, which will generate value far beyond the specific trials for which they were created. We heard from Professor Helen McShane, Principal Investigator at the Oxford Martin Programme on Vaccines at Oxford University, whose team is now undertaking data analysis on results from a TB vaccine trial among 650 HIV-positive volunteers over two sites in Khayelitsha (Cape Town) and Dakar. Her pride was evident in the fact that both of these sites now house clinical grade laboratories and trained staff.

EDCTP and the UK – strengthening research in Africa

Professor Charles Mgone, Executive Director of EDCTP, talked about the four Regional Networks of Excellence (NoE) spanning each of Central, East, West and Southern Africa and involving 64 institutions across 21 countries. The NoE scheme has now offered training to 1,000 African researchers, and has leveraged an additional €24m to upgrade infrastructure and laboratories, strengthen ethics bodies and south-south collaboration, and respond to local needs. EDCTP has directly trained 406 African PhDs or MScs, and 56 African Senior and Career Fellowships; over 40% of these candidates have been female. 28% of EDCTP Project Leaders have been female – an impressive achievement in an African clinical research context in 2014, and a strong basis for continuing championing of women African scientists.

Some may ask whether HIV, TB or Malaria should concern the UK; again, one needs only to look to the future. In the medium term, tackling diseases in emerging economies matters when the UK’s population is increasingly linked to theirs through trade, travel and tourism. And in the longer term, a healthy, productive world will provide greater stability and opportunities for prosperity for the UK. For developing countries, the role of donor countries here is less one of crutch as of catalyst; every $1 invested by donors into TB treatment for example generates a $30 return for households and governments seeking to escape crippling healthcare costs and lost productivity. Investing in global health R&D is investing in future global prosperity.

Back in the UK, EDCTP is already saving the NHS money in the long-run and impacting on the prevalence of disease, as technologies such as the GeneXpert rapid TB diagnosis machine, and ARV treatments for children, are implemented in UK hospitals and clinics. Such products will also help control the threat of drug-resistance in the UK, as new tools make completing treatment much less painful and difficult.

The UK Government is by far the leading funder of EDCTP, providing €214 million to 82 projects during the first phase, involving 100 UK collaborators. (Our contributions break down as €31.2m in direct ‘cash’ contributions through the MRC and DfID, plus €182.8m of indirect, ‘in kind’ contributions of facilities and expertise; this puts us ahead of Italy on €115m, the Netherlands on €87m, and Germany on €76m.) The UK is also the only country to link so closely the work of our Medical Research Council (MRC) and Department for International Development (DfID). During the next phase, the MRC and DfID have already agreed to jointly commit €4.5m in cash and £40m in kind every year, totalling €445m over the next ten years.

EDCTP and the UK – a crucial role

It is crucial that the UK maintain its leading role in EDCTP, not only to fund this vital work but also to bring other European countries closer to our own commitment level. Running from 2014 to 2023, EDCTP2 aims to raise €1.3 billion to take on further challenges: research into neglected tropical diseases (NTDs), and other common killer diseases such as pneumonia and diarrhoea, and emerging infections such as Ebola. Under Horizon 2020, the European Commission’s €80bn research and innovation framework, EDCTP2 will also expand to cover all clinical trial phases including implementation, and bring sub-Saharan African partners into the General Assembly.

The UK’s leadership of EDCTP further cements our role as a worldwide leader on global health and in the wider Post2015 development discussions. The consensus at the event unsurprisingly held that the UK Government should continue to recognise EDCTP as a key investment with proven success and, as the leading funder and Chair of the Parliamentary Assembly, should encourage other states to increase their cash contributions to EDCTP. Insightful questions from Baroness Barker of the APPG HIV reminded us of the need to ensure that any new products reach the market at a cost that is accessible to the citizens of developing countries (an issue explored in the APPG HIV’s soon to be released report). And RESULTS UK’s Steve Lewis both thanked and laid down the challenge for UK Parliamentarians and citizens – to maintain your support for the UK’s leadership in Global Health R&D, and see these incredible products reach the market and the people who need them.