European Week of Action for Girls – Standing up for girls’ rights! 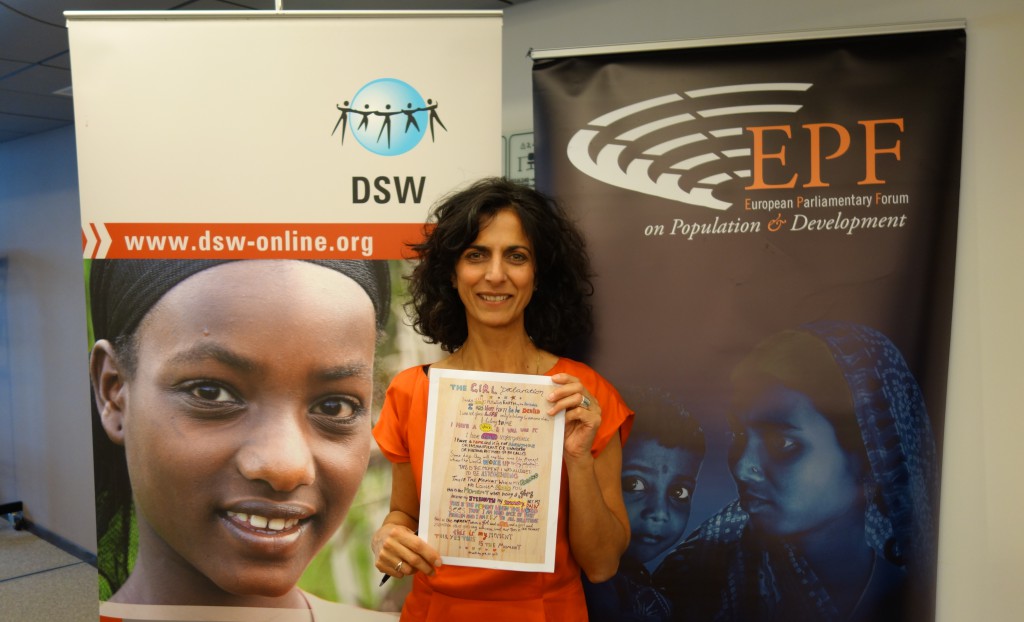 As part of the “European Alliance for Girls[1]” DSW organised a number of high-profile events during this week for the European Week of Action for Girls (EWAG) on the eve of the International Day of the Girl Child on October 11. The fourth edition of the European Week of Action for Girls is organised by Plan EU Office and several civil society partner organisations under the patronage of the European Parliament and in partnership with the United Nations under the theme of  “GirlPower: from the shadows to centre stage”, this year’s week focused on the impact of social norms on girls and how we enable girls to overcome them.

DSW organised a number of high-profile events during this week independently and alongside its partners in the European Alliance for Girls – EPF, Aidos and Equipop. The goal of the European Alliance for Girls is to raise awareness around the importance of placing girls and their needs at the heart of the post-2015 agenda. This advocacy campaign is based on the issues that over 500 girls around the world have identified in the Girl Declaration such as access to education, health, citizenship and rights, security and economic empowerment.

Kicking off the EWAG on Monday October 6th, DSW organised with the European Commission Directorate General for Development (DEVCO) a lunch conference on the theme of “Empowering Girls in Kenya’s coast region: increasing access to sexual and reproductive health and rights”. The event, hosted at DEVCO’s headquarters, focused on DSW projects in Kenya to empower girls for a healthy future and equal opportunities. In particular, DSW’s Head of EU Advocacy Cecile Vernant focused on the Young Adolescent Project (YAP) and the EU-sponsored Delivering for Young mothers project and how they have supported the economic and social empowerment of girls through education and training on SRHR.  The audience was composed of representatives of the European Commission (various units within the DG for development cooperation), and civil society representatives in Brussels. The event materials and DSW’s presentation at the event are available here. The videos presented can be found on DSW’s YouTube channel.

Following the infopoint, DSW joined as a panellist for the formal launch event of the EWAG. DSW participated in the second panel of the launch event, which investigated positive experiences and practices for engaging men and boys in promoting gender equality. Alongside DSW were speakers from DG DEVCO, Rutgers WPF, and UNFPA Brussels. Cecile, representing DSW, said during the panel debate that “you need to include men and boys in order to be able to scale up the impact of work on gender equality.” UNFPA, represented by Ivan Hermann, Senior Policy and External Relations Adviser, cited their work in Niger: “we [UNFPA] have made more headway in 4 years than in the past 20 years, through awareness raising and engaging men… By engaging men and boys, family planning doubled in many of the regions of Niger in just these 4 years.”

On Tuesday October 7, DSW organised with EPF and the collaboration of the International Rescue Committee , a photo-booth and information point at the European Parliament on the theme of girls’ rights and centred on the Girl Declaration. Hosted under the patronage of the chair of the Parliament’s Committee on Development, MEP Linda McAvan, this initiative was very successful in attracting MEPs, their assistants and senior representatives of UN organisations and NGOs in Brussels. In total, over 100 pictures were taken in support of girls’ rights and 28 MEPs from across the EU came down to take a photo and show their support for girls’ rights and the Girl Declaration. A gallery of some of the best pictures from the day can be viewed here and at the end of the blog.

European Week of Action for Girls: Stopping poverty before it starts – girls and the post-2015 agenda

The final activity of the European Week of Action for Girls for us in Brussels was a roundtable event at the European Parliament on October 9 on “Stopping poverty before it starts: A pivotal role for girls on the post-2015 development agenda”. The event was organised by AIDOS, DSW and EPF and was hosted by Ms. McAvan and Maria Arena MEP, a member of the Parliament’s Committee on Women’s Rights and Gender Equality. Other speakers at the event included Sietske Steneker, Director of the UNFPA Brussels office, Stephan Auer, Director for Multilateral Relations and Global Issues at the EEAS, Valérie Kahn, Executive Director, Group Development Pakistan, and Chloé Burton of the Belgian Youth Council. Interventions also came from Maurice Ponga MEP, Vice President of the Parliament’s Development Committee, and Elly Schlein MEP.

[1] The European Alliance for Girls – European Parliamentary Forum on population and development(EPF), Aidos, EquiPop, and DSW.