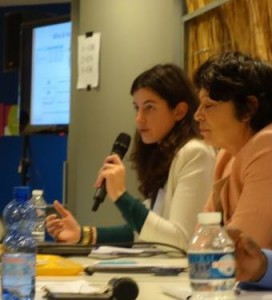 As part of the Steering Committee of the CONCORD Cotonou Working Group, I actively helped putting together a lunch debate and participated as a panellist opened by MEP Michèle Rivasi (Greens, FR) on December 1st, at the European Parliament.

My session was dedicated to the European Development Fund (EDF), during which I explained the state of play of this funding instrument and how civil society could support Members of Parliament (MPs) in making it work for development. The importance of making sure that 20% of EDF funds will be allocated to human development was highlighted both during my intervention and by MEP Rivasi, who specifically reinforced the case for health and education. In addition, I recalled the EU commitment to gender equality and the promotion of human rights, as cross cutting issues.

More than 120 people participated in the lunch debate, including MEPs from different political groups and countries. During that day, briefings papers by CONCORD were distributed, as well as fast facts that described the importance of investing in SRHR, namely in ACP countries.

Finally I also had the opportunity to be part of a campaign carried out by MEP Catherine Bearder (ALDE, UK) about ‘Getting Girls to Schools’. This was a full and active day of the JPA in Strasbourg, which will hopefully lead to further engagement from Parliamentarians on ACP – EU relations.