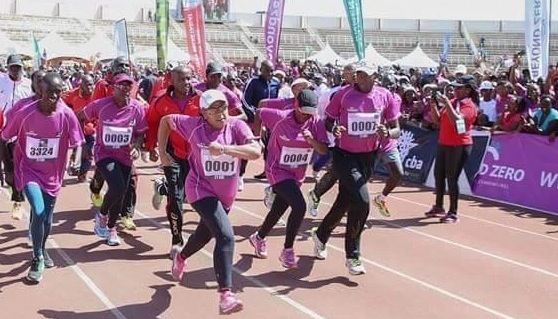 NAIROBI: The Kenyan First Lady Her Excellency Margaret Kenyatta led more than 15,000 runners in the “Beyond Zero” half marathon run to raise funds for maternal and child health on International Women’s Day. Despite its commitment to maternal health care, Kenya still has a high maternal mortality rate of 488 deaths per 100,000 live births. The country had committed to reduce these deaths to 147 per 100,000 live births by 2015 and the First Lady’s efforts are part of the drive to achieve this.

The ‘Beyond Zero Campaign’ was launched on 24 January 2014 in order to improve maternal and child health outcomes in the country. The initiative also aims to accelerate the implementation of the national plan towards the elimination of new HIV infections among children. It aims at equipping each of the 47 counties with a fully equipped mobile clinic to deliver essential services such as vaccination, ante-natal care, HIV testing and treatment especially to those who don’t have easy access to health facilities.

The ‘Beyond Zero campaign’ is part of the initiatives outlined in the Strategic Framework for the engagement of the First Lady in HIV control and promotion of maternal, newborn and child health in Kenya that was unveiled on World AIDS Day 2013. The framework aims to galvanise high-level leadership in ending new HIV infections among children and reducing HIV related deaths among women and children in Kenya. DSW Kenya was also well represented at the run with several staff taking part