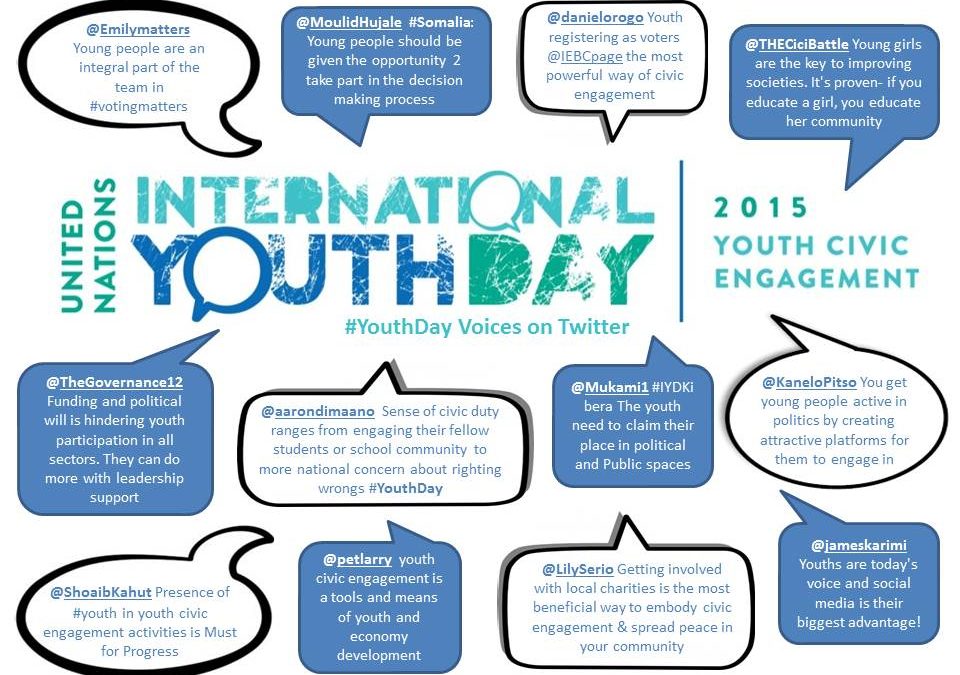 International Youth Day 2015 has as its theme youth civic engagement. As the UN rightly recognizes, involving young people in the decisions taken by governments and politicians is vital if national and international commitments are to be met and we are able to achieve sustainable human development.

However, most of the time the opportunities for young people to engage politically, economically and socially are limited or non-existent. This is particularly the case for girls and young women – whose voices are disproportionately marginalized across the world.

Working with young men and women to make sure that their voices are heard continues to be at the core of what we as an organisation are about. In Kenya, for example, DSW is actively working in communities to promote and support youth civic engagement. Our youth-to-youth initiative works with youth clubs and groups throughout east Africa to support their access to vital sexual and reproductive health and rights. Check out what went on in Kenya for International Youth Day 2015 on our just-released blog post.

We are also working to give these young people the tools that they need to advocate on their own behalf for political change in support of young people. International Youth Day 2015 is an important opportunity to re-emphasise these messages.

On the particular issue of support for girls within the broader youth engagement effort, girls and young women remain on the margins of political, social and economic empowerment. The current situation – where girls have less or no access to education, employment, land rights, political representation, and access to the health and social services they need as young women – continues to have significant negative effects on low- and middle-income countries.

On the flip side, empowering girls to have equal access in all these areas can have transformation effects for their local communities and the wider global development agenda. For example, girls who stay in school as teenagers are more likely to have sex for the first time at an older age and are more likely to use contraception. Closing the joblessness gap between girls and boys could result in an increase of GDP by 1.2 per cent in just a single year. Imagine the impact this could have on sustainable development in some of the world’s poorest countries.

For this reason, girls remain at the heart of DSW’s efforts to engage with young people and to promote the involvement of young people in shaping the decisions that matter to them. It is why we are a signatory and one of the big boosters of the Girl Declaration and the Girl Effect, and why we are highlighting girls for International Youth Day 2015.

European Week of Action for Girls 2015

It is also why we are among the core organisers of the European Week of Action for Girls. The Week of Action takes place in Brussels each year around the International Day of the Girl Child on October 11th. The purpose of the Week – run together with other NGOs in Brussels who are active on girls’ rights – is to bring front and centre for one week the importance of girls in the European Union’s international development and humanitarian policy.

Through the week, we try to bring the voices of girls and young women to the key decision-makers in Brussels – through youth representatives from low- and middle-income countries, high-level debates with the UN, European Commission and European Parliament, as well as media stunts and photo opportunities to engage politicians in a more light-hearted way.

Work is well underway with the Week of Action partners to make sure that the 2015 edition will be the best yet. As this in International Youth Day 2015 – and girls are a core demographic for us – we thought we would give a sneak preview of the week’s activities.

We will kick-off the week on October 12th with a launch event hosted by the Luxembourg Presidency of the Council of the EU (the current holders of the rotating Presidency and one of the week’s patrons). Activities will then continue throughout the week at locations across Brussels, including at the European Commission and the European Parliament. You can see more information about the event above. We will update you on the latest news and announcements about events and speakers here and on the Week of Action website!

About the European Week of Action for Girls

The European Week of Action for Girls is an annual week-long event which aims to ensure that girls’ empowerment is promoted and their rights are protected and fulfilled in the EU’s external action, through adequate policies, funding and programs.

Through a series of policy, advocacy, media, campaigning and youth-focused events, the Week of Action highlights the power and potential of girls as development actors and agents of change, as well as the particular challenges they face in realising their rights and the EU’s role in addressing these. Now in its fifth year, the Week of Action is organised by a coalition of civil society organisations working on topics linked to gender equality and/or children’s and youth rights, notably in development and humanitarian settings.