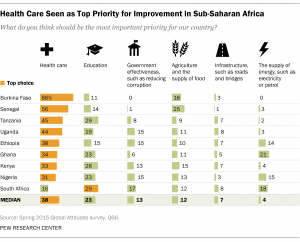 As we head into the seventh World Health Summit, a new survey from Pew Research Center finds many people in sub-Saharan Africa are unhappy with the quality of their health care and want health to be one of the top development priorities for their country’s future.

The survey included nine major sub-Saharan African nations that represent roughly half of the population in the region. A median of 82% across these nine countries say that poor quality health care is a very big problem in their nation. Also high on the list of concerns are lack of job opportunities (88%), poor quality schools (81%), government corruption (80%) and crime (80%). When asked what development issues besides the economy should be the top priority for improvement in their country, eight of the nine publics choose health care. Education comes in second place in most nations, though it rises to the top in South Africa.

A 2013 Pew Research Center survey asked respondents in six of the nine nations to name their number one health priority. The survey found that the top issues were improving hospitals (17%), preventing and treating HIV/AIDs (15%) and fighting hunger (13%). Other concerns, such as quality drinking water (7%), infectious diseases (6%), prenatal care (6%) and childhood immunizations (1%), were lower down the list. On many of these issues, sub-Saharan Africa has made considerable progress since the establishment of the Millennium Development Goals in 2000, but not quite enough to meet the MDG targets. Sub-Saharan Africa continues to have the largest number of new HIV cases, the highest percentage of undernourished people, and the highest maternal and under-five mortality rates.

Health care is one of the key areas where foreign aid groups have been involved in sub-Saharan Africa. Overall, in the 2015 survey, the nine publics express a great deal of confidence in foreign aid organizations to help solve major problems in their country (median of 70%). And across all nine countries, 68% say their country needs more foreign assistance than they currently receive. The one outlier is South Africa, where just 26% want more aid. Still, many also have some serious concerns about foreign aid programs. Roughly half (53%) say they are corrupt and 45% think they are inefficient.

Sub-Saharan Africa has experienced considerable economic growth in the past decade. Indeed, this growth has led publics in the region to be some of the most content with their economies and the most optimistic about their economic future compared with other parts of the world. Nonetheless, people also say their countries continue to face serious challenges, with health care considered one of the top problems. These concerns are borne out by statistics on health and poverty, which show that the region is lagging many other developing areas of the world. To overcome these obstacles, people in sub-Saharan Africa clearly express a desire for greater involvement from the international community.

Katie Simmons is associate director of research at Pew Research Center. She is an expert in survey methodology and conducts research on international public opinion on a variety of topics, including U.S. foreign policy, the global economy, democracy and terrorism. Simmons helps to coordinate the center-wide international research agenda and serves as a methodology consultant on all international projects at the center. She is also involved in all aspects of the research process, such as managing survey projects, developing questionnaires, analyzing data and writing reports. Prior to joining Pew Research Center, Simmons worked as a research analyst for non-profit clients at Belden Russonello Strategists. She earned her doctorate in political science from the University of Michigan. Simmons is an author of reports on the crisis in Ukraine, global economic conditions, life satisfaction and economic reform in Mexico. Simmons speaks about findings from Pew Research Center studies to a variety of audiences, including government agencies, academic groups and domestic and international media.