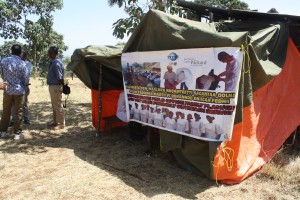 Seven months away from the conclusion of its second phase, DSW’s project (Community-Based Responses to SRH/FP & Livelihood Needs of Married Adolescent Girls and Young Women) in East Wellega Zone has been reviewed by the high level stakeholders. On March 1, 2016, the fifth annual review meeting was organized by DSW to discuss about the project that took place in Nekemte town, some 330 km southwest of Addis.

Key stakeholders comprised the Federal Charities and Societies’ Agency, Oromia region’s Health Office and Bureau of Finance and Economic Development, as well as primary beneficiaries of the project had participated in an annual event during which all major activities and outcomes of the project have to be reviewed to determine the way forward.

In his opening speech, Feyera Assefa who is the country director of DSW Ethiopia had reassured the participants that the grassroots community whose stake is high in the project remains the first to benefit. He said that “everybody who contributed to the success of this project in the past five years should continue to do so in the same spirit and ensure its sustainability”.

Speaking to the participants during the meeting, officials from the region and zonal health offices made special emphasis on the urgent need for the expansion of the project to include more and more kebele from other woreda previously un-addressed. They also discussed about the support of income-based livelihood activities by the project in an extensive scale. The other issues that drew the attention of most of the stakeholders are the possibilities of scaling up the local capacity building scheme for health service providers not only at the kebele level as was the case in the past, but also for those at woreda level.

Prominent among the participants include married adolescent girls who benefit from the intervention this project brought about. Integrating the family planning service provision with economic opportunities through various types of income generating activities (IGAs) has genuinely sustained the positive trend particularly of delaying first births. “We let the project beneficiaries choose the types of methods either to delay first births or spacing childbearing”, says Feyera, noting that, however, he recognizes the fact that a growing number of married adolescent girls and young women increasingly preferred to use long-acting family planning methods for various legitimate reasons.
“In terms of conveniences and effectiveness, we are better off using the long-acting family planning methods than if we would use those of the short-term.

However, some among us are really concerned about as to what will happen by the end of the third or fifth year when removal of the implanon insertion is necessary and assuming the project has then phased out”, asked one family planning user who herself is married adolescent girls. In response to her and others who share similar concern, official of the Oromia Regional Health Bureau firmly reassured that “as part of the national health sector development program, it is incumbent upon the public health institutions established at various levels in the community, among other things, to service the removal of implanon free of charges at any time of requests.

In an effort to offer the opportunity of drawing first-hand experience and refresh knowledge of the project to draw crucial inputs for discussion would be held the following day, field visits were scheduled on 29th February. Representatives from the Oromia Regional Health Bureau and those of the Federal Charities and Societies Agency took special interest and got on board to have visited the outreach family planning service delivery and IGAs.
“Our official action and reaction with regards to NGOs operating in Ethiopia partly are based on what we have identified, at least, four categories under which we rate the merit of performances”, says a senior expert at the Federal Charities and Societies Agency, Nathenel Kasaye who particularly is responsible in the follow-up team at the Agency to oversee civil society organizations’ (CSOs) performance based on the government policies and directives by which NGOs and CSOs are governed in Ethiopia.

He further revealed that “there are those NGOs simply under-perform due to inefficiency, there are those completely fail their commitment and engage in something else. We also have some NGOs often headed by foreign nationals that do not reach the community at all and simply benefit high-paid own staff members. Of course, we know very well that there are NGOs always put a lot of efforts and get the community benefited a great deal. I genuinely believe and testify that DSW belongs to the latter category”.

Way back in October 2010 when the project was launched the first phase there were 46 kebele, unit of local government (counties) clustered across seven rural woreda (Districts). The first phase of the project span three years during which period about 10,045 married adolescent girls (aged, 15 – 19) had delayed first births using two or more types of family planning methods. Those who spaced childbearing (aged, 19 – 24) were about 37,021. The second phase set to stretch from October 2013 to September 2016. The number of kebele increased by 58 more kebele and brings the total up to 104 along with two additional populous woreda. The ‘community based responses to SRH/FP and livelihood needs of married adolescent girls and young women’ is a model project. Given its particular focus on previously unreached demographic groups, it became unique and arguably being piloted for the first time by DSW with the technical and financial support of the David & Lucile Packard Foundation.