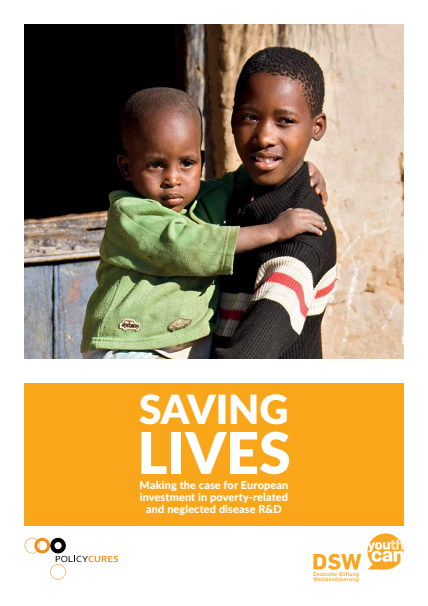 Today, in recognition of World AIDS Day, sees the launch of two new initiatives from Deutsche Stiftung Weltbevölkerung (DSW). The first, ‘Imagine2030’ is a new global health focused campaign which aims at raising awareness about the need for increased EU investment in global health innovation if we are to defeat diseases of poverty, such HIV & AIDS, malaria, and tuberculosis (TB), by 2030. You can read all about it in my previous blog: ‘Imagine2030: seven key facts you need to know ahead of World AIDS Day’.

The second of these initiatives is the release of a special commissioned report from Policy Cures, titled ‘Saving Lives – Making the Case for European Investment in Poverty-Related and Neglected Diseases’, available as both a full report and as a brief summary. This report provides an in-depth analysis of EU funding and support for global health research and development since 2007, how this compares with the direct investments made by European Governments, an analysis of the impact that this investment has had on global health to date, and the actual benefits it has created for Europe.

It is not a coincidence that these two initiatives are launching on World AIDS Day. Even though the world has made solid progress in the fight against this tragic disease, more drive is needed if we are to finally end it. According to a recent report from UNAIDS, this momentum has succeeded in producing some very encouraging results, with, for instance, new HIV infections among children continuing to fall. However, young women in particular, are still vulnerable to becoming infected – especially in sub-Saharan Africa. They are facing what UNAIDS refer to as a ‘triple threat’, in that they are at high risk of infection, have low rates of testing, and have poor compliance with treatment.

The Saving Lives report examines what role the EU is playing and what more it can do to create sustainable impact, not only in eliminating HIV & AIDS, but also malaria, TB, and a whole host of other neglected tropical diseases that continue to plague families living in countries of severe poverty. However, saving young people’s lives is not the only benefit from further investment – an increase in funding for global health innovation will also lead to a number of significant economic benefits for the EU too. Increased commitment and funding will:

These are just some of the benefits will accrue from further investment to address the current dire lack of vaccines, diagnostics, and drugs that exist to wipe these deadly diseases. Now that the EU is reviewing its seven year budget, we need our policy-makers to prioritize global health research and development. We are making good progress but we need to do more. The health of the world depends on it.

Make sure to check out our vision of a world free from deadly diseases of poverty: www.imagine2030.org