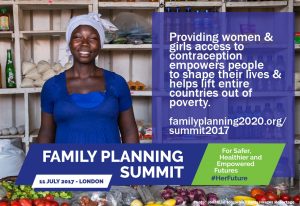 By reintroducing the Global Gag Rule, the Trump administration has laid down yet another benchmark on their path away from global solidarity and cooperation. The rule gags international NGOs inter alia over offering advice about legal abortion as a requirement in order to receive family planning funding from the U.S. Through the draconian outgrowth of the policy practiced by the current U.S. government, developing countries are facing tremendous cuts in U.S. funded programmes run by NGOs for access to modern contraceptives. This will have severe impacts on family planning and is likely to effect health care at large, ranging from HIV services over tuberculosis and even malaria, not to mention the dramatic rise in maternal deaths due to unwanted pregnancies and poor obstetrics, just like the experience has taught us before. According to the Guardian, funding as high as $8 billion could be at stake. This figure is compelling. The reinforcement of the policy was followed by the decision of the U.S. president to defund the United Nations Population Fund (UNFPA) and abandon family planning in his budget draft. 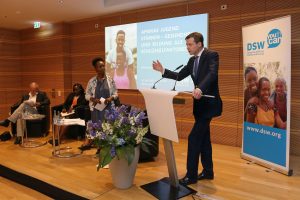 In order to contribute to filling this huge funding gap, Melinda Gates announced to increase funding for family planning up to 60% over the course of the next 4 years at the FP 2020 Summit held in London on July 11th. She fears not only the FP 2020 in danger, a global movement supported by the Bill and Melinda Gates Foundation (BMGF) to give 120 million women access to contraceptives by 2020. But even worse, she dreads the reverse of the progress that has been achieved since 2012 when this goal was proclaimed. In an interview Bill Gates referred to their attempts to raise awareness with the Trump administration for the longterm effects of the political course taken on.

Meanwhile, other countries come to realize that it will be on them to take up on the promises made to developing countries. A fact that Parliamentary State Secretary Silberhorn from the  Federal Ministry for Economic Cooperation and Development (BMZ) hinted on when he opened the DSW Event Afrikas Jugend stärken –Gesundheit und Bildung als Schlüsselfaktoren (Strengthening Africa’s Youth – Health and Education as Key Factors) on May 30th with a speech.

However, he didn’t give insight on specific German targets or projects to compensate for financial cutbacks in U.S. funding in family planning but instead underlined the achievements already reached by the BMZ Initiative on Rights-based Family Planning and Maternal Health which followed a pledge Germany

She Decides Conference in Brussels in march

made at the G8 Summit in 2010, with which the BMZ is operating in “more than 30 countries” and which has helped “more than 9 million additional couples to use modern methods of contraception”. In 2016 Germany followed up with committing to funding until 2019. So far this commitment has not been reconfirmed, which is of some concern in electoral terms.

In the Summary of the Commitments of the FP 2020 Summit Germany is absent. Overall, as other private donors and countries have come forward with political and financial commitments on family planning at the FP 2020 Summit and the She Decides Conference in march, the German government chose not to be present at the decision making level on these occasions, but instead was conspicuously silent if not even withdrawn.

But the Demograpahic Dividend won’t be initiated without improvements in education and health services, 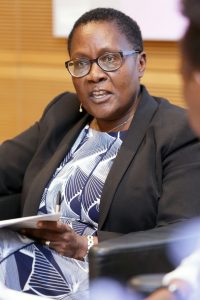 Dr. Kibaru-Mbae resuming about her efforts on family planning in Kenya

especially for young girls. How education, family planning, and empowering youth are all intertwined, was spelled out in detail to the audience by the two female experts from Africa during their contribution on the panel of the recent DSW event in Berlin. Josephine Kibaru-Mbae, Director General of National Council for Population and Development in Kenya and  M.D. with expertise in obstetrics and gynaecology, accounted that fertility rates have dropped from 8% to 4% but reminded the audience that HIV infections are still highest among girls aged 11 – 19 years and that every 5th woman is forced to marry before they turn 18. 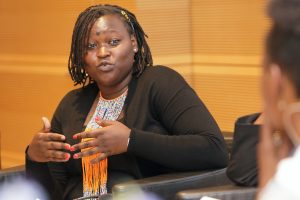 Christine Omao, DSW Youth Champion from Kenya, gave an insight on every day issues in her work with youngsters. She disclosed to the audience that even though new schools have been founded, the sanitary facilities are still poor. This will leave girls and young women miss class when they have their period. Moreover, men take advantage by selling them pads in exchange for sex. She proposed to provide menstruation kits as a means to avoid sexual exploitation and absences from school due to menorrhea. In Christine’s view, this would also avoid longterm consequences such as unwanted teenage pregnancies, maternal or neonatal deaths, and on the other hand social, educational, and job discrimination.

If we take action today, the African youth generation – the largest of all times – will unlock their potential tomorrow. Calling on political leaders and donors to focus on family planning will make the Demographic Dividend come true, which western economies so eagerly seek out for.