Euromapping 2017 – EU must step up support for reproductive health!

BRUSSELS, 11 July – Europe needs to do more to support sexual and reproductive health and rights of people living in countries of poverty. This is the central message from the new Euromapping report, released by the Deutsche Stiftung Weltbevölkerung (DSW), and the European Parliamentary Forum on Population and Development (EPF) to mark World Population Day. The report is available at www.euromapping.org.

The report provides an in-depth analysis of the latest available data on aid flows from members of the OECD’s Development Assistance Committee (DAC). Focusing on funding for reproductive, maternal, newborn and child health (RMNCH) and for family planning (FP), it reveals that the EU’s overall contribution is disproportionately low relative to its overall Official Development Assistance (ODA) funding.

‘More efforts are needed from OECD DAC donors, especially the EU, to deliver on their political commitments,’ Renate Bähr, DSW Executive Director, said. ‘This is all the more important to avoid wholesale detrimental effects on the health and well-being of millions of women and girls, and on their families and communities, should the Trump administration implements its decision to re-enact the Global Gag Rule.’

According to our analysis of the latest OECD data, in 2015 only five major donors — Canada, Germany, Japan, the UK, and the US — provided over 75% of all RMNCH and more than 80% of FP commitments and disbursements. 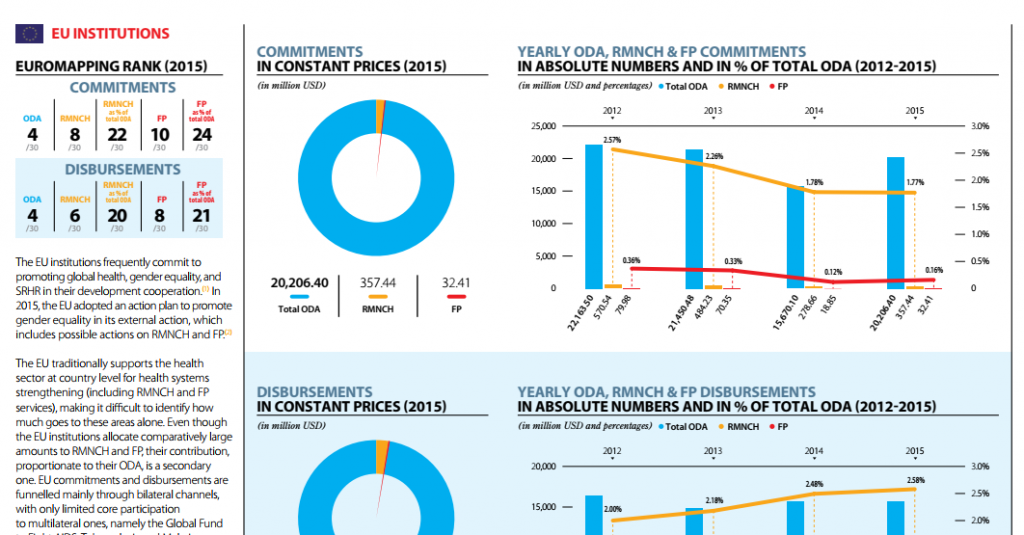 ‘While the EU institutions, France, Germany, and Japan provide some of the largest RMNCH and FP flows,’ explained Neil Datta, EPF Secretary, ‘they score in the bottom half of all rankings when we consider their contribution as a percentage of their total ODA.’ ‘On the other hand, smaller economies, such as Luxembourg or Ireland, devote a far higher proportion of their development aid to RMNCH and FP, making those issues a priority in their development cooperation policies,’ he added.

Some countries have, however, charted a radically different course. In the period under review, Canada massively increased its commitments to RMNCH and FP, and is now tied with the United Kingdom as the second-highest donor in this area. The Netherlands and Norway similarly delivered on the priority they gave to sexual and reproductive health in their development cooperation policies, and score highly in all our rankings as a result.

Deutsche Stiftung Weltbevölkerung (DSW) focuses on the needs and potential of the largest youth generation in history. We are committed to creating demand for and access to health information, services and supplies, and to securing their right for a brighter future. We achieve this by engaging in gender sensitive advocacy, capacity development, and family planning initiatives. With our headquarters Germany, DSW maintains offices in Ethiopia, Kenya, Tanzania, and Uganda, as well as liaison offices in Berlin and Brussels.

EPF is a network of members of parliaments from across Europe who are committed to protecting the sexual and reproductive health of the world’s most vulnerable people, both at home and overseas.

We believe that women should always have the right to decide upon the number of children they wish to have, and should never be denied the education or other means to achieve this that they are entitled to.