Brussels, September 7, 2017: In the results of a new survey released today, a two-thirds majority of the European Parliament believes that the EU is not spending enough money to fund research that is targeted at HIV & AIDS, Tuberculosis, Malaria, and other diseases of poverty that affect over one billion people worldwide, just as EU member states threaten to slash the EU’s annual budget allocation for this area.

In a poll of Members of the European Parliament (MEPs) on attitudes to the EU and its role in global development, conducted by Kantar Emnid and commissioned by international NGO Deutsche Stiftung Weltbevölkerung (DSW), 84% of MEPs think it is important to fund research into these disease and 66% of MEPs that they believe that EU R&D funding for diseases of poverty should be increased for the EU’s next research programme, known as FP9. 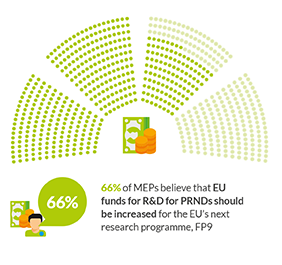 DSW’s Cecile Vernant, Head of EU Office, said: “MEPs understand that without this vital R&D, we have no hope of eradicating these diseases by 2030 – something the EU has committed itself to. Unfortunately, this message has not gotten through to EU member states, or the European Commission, which are threatening to slash the EU’s 2018 budget allocation in this area.  As we head into difficult budget negotiations, it is imperative that the European Parliament pushes back against these highly regressive budget cuts, and forces the EU to back its rhetoric on global health and sustainable development with financial support.”

In its budget proposals for 2018, the European Commission has proposed budget cuts of 10.11% to the Horizon 2020 budget line for “improving lifelong health and wellbeing“, from which the majority of funding for global health is located. In their response, the EU Council is proposing an additional swingeing cut of 12% on top of this. According to the most recently available data, the EU’s annual support for research funding totalled 125m USD, second behind the USA in global health R&D rankings.

The DSW MEP survey also showed strong support among MEPs for EU action to prioritise the strengthening of women’s and girl’s rights (67% in favour), and that the EU promotes sexual and reproductive health and rights (SRHR) – issues like family planning, sexuality education, and maternal health – in its development policy (83% in favour). What it more, in light of the upcoming EU-Africa summit in Cote d’Ivoire in November 2017, 89% of MEPs believe that it is important to promote SRHR as part of EU-Africa relations. Additionally, the survey found that:

Download the full results of the DSW MEP Survey