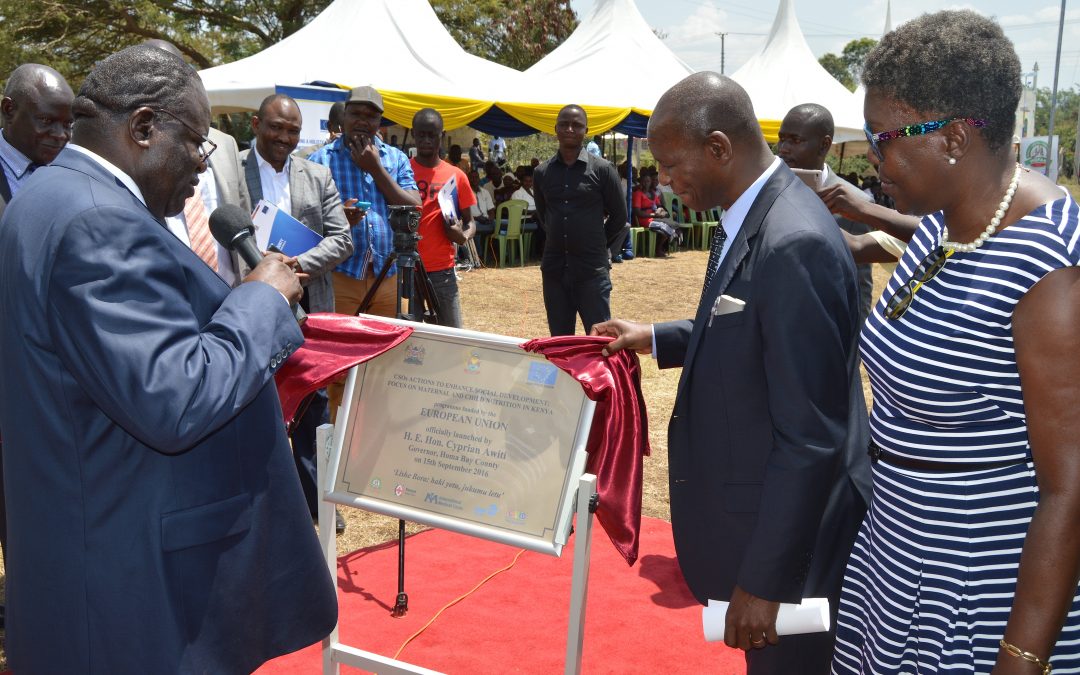 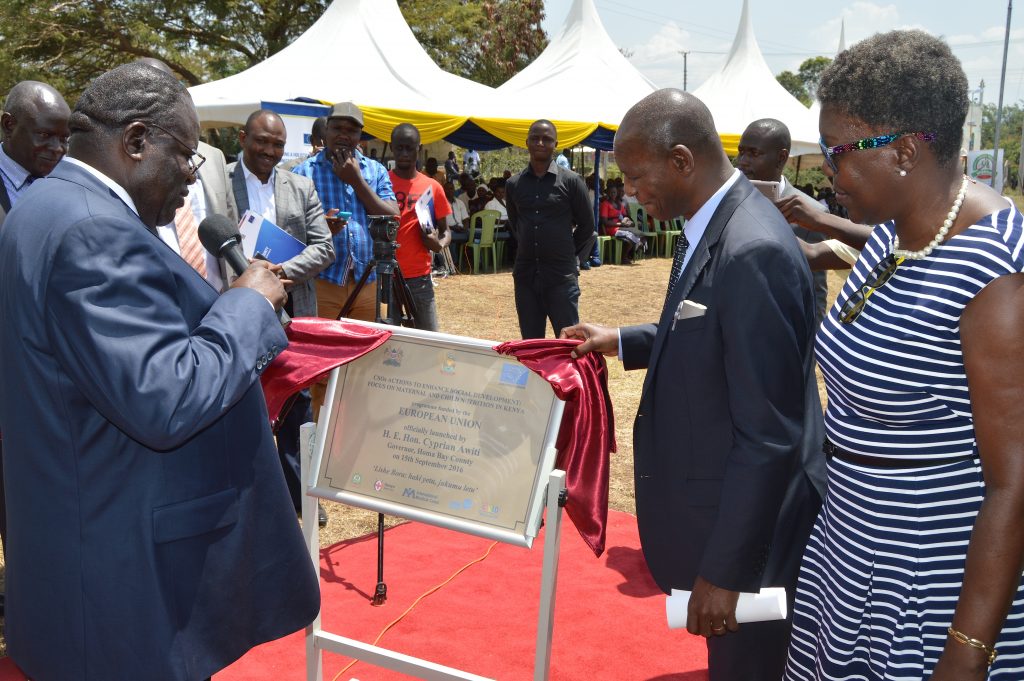 The Governor, Homabay County, at the launch of the “Improving Nutrition for Women and Children” project in 2016 Photo/DSW Kenya.

In May 2017, Moses was suffering from acute severe malnutrition and could barely stand. His journey to recovery started following a visit by a community health volunteer, who visited his home and took his Mid-Upper Arm Circumference and on noticing that Moses is severely malnourished, referred him to Rangwe Sub County Hospital for treatment.

Mid-Upper Arm Circumference (MUAC) is the circumference of the left upper arm, measured at the mid-point between the tip of the shoulder and the tip of the elbow (olecranon process and the acromium).MUAC is used for the assessment of nutritional status.

Cases such as Moses’s are unfortunately relatively common in Homa Bay County. The global acute malnutrition (GAM) rate is at 4.6% while the stunting rate is 21.8% (SMART SURVEY 2016). Acute malnutrition leads to death in children if not properly managed.

In a bid to tackle malnutrition in Rangwe Sub-county of Homa Bay County, DSW is working with the county department of health and other stakeholders through the project “Improving Nutrition for Women and Children” to reduce the rates of malnutrition in women and children.

The project seeks to improve the capacity of health care workers, increase service seeking by the residents of the county and enhancing political commitment of the county and sub county officials to address malnutrition among women of reproductive age and children below 59 months (5 years).

The impact of DSW’s work in Homa Bay County

Since 2016, the project has reached 33 health officers including nurses, nutritionists and clinical officers, 8 community health extension workers and 80 community health volunteers with training on nutrition.

Speaking at a stakeholders’ meeting held in July, the community health strategy focal person for Rangwe Sub-county Mr. Abil Obiero said that the project has led to a strengthened the referral system that is able to identify cases of malnutrition, give nutrition counseling and conduct referrals.

“Since DSW started supporting our work, our CHVs (community health volunteers) have received trainings(sic), support in form of reporting tools and monthly stipend. This has improved our reporting rates which have been very low in the past. Most CHVs used to report zero data on nutrition indicators. This has so far changed and they report promptly” said Mr. Obiero.

Moses’s case has also done one other important thing. It has created awareness to the mother, the family and their community that malnutrition is treatable and through such the projects will have cases to refer to in lobbying for increased nutrition funding by the county government.

“Improving Nutrition for Women and Children” is a three-year project (2016 – 2019) that seeks to improve nutritional status of women and children in Homa Bay County, Rangwe Sub County, funded by the European Union.