International Day of the Girl: will these ambitious sisters realize their dreams? 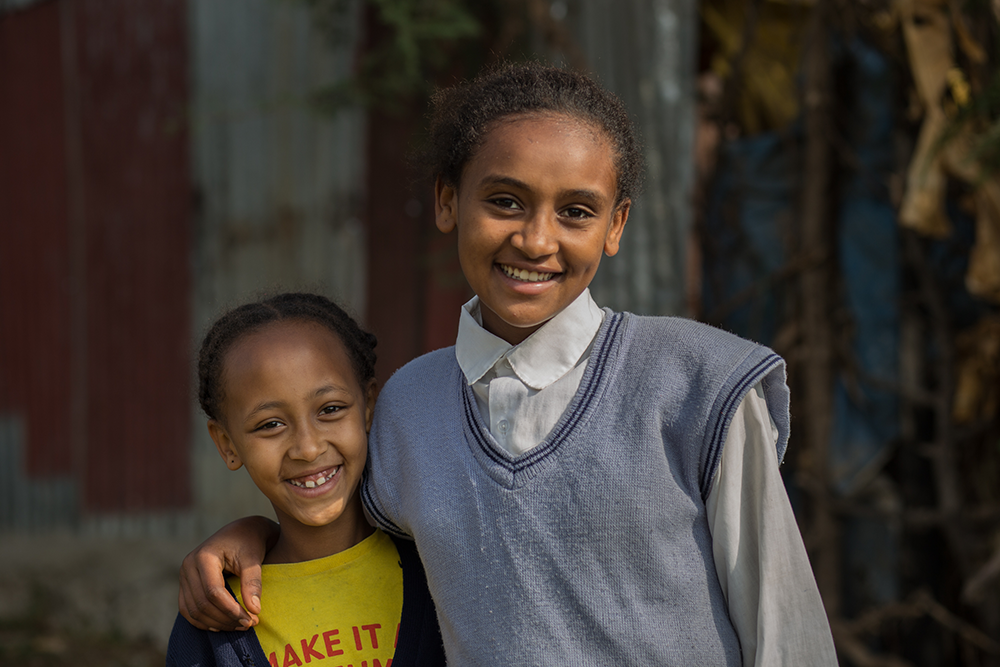 A future pilot and a future lawyer? The sisters Seble and Lelise are self-confident girls who work hard for their future. With support and good policies, they could achieve their dreams – but there are also obstacles.

When Lelise, 8, talks about her big sister Seble, she lightens up. “My sister is my tutor. She helps me a lot with my studies. I want to become a pilot and make her happy.”
Currently attending grade 2, Lelise already knows she has to study hard to achieve her dreams. Luckily, she has access to education – unlike 20 % of children in sub-Saharan Africa who are out of school already at primary school level. When it comes to lower secondary age, one in three children does not attend school, and more than half of children don’t reach upper secondary school level. Girls face particular risks, causing them drop out of school much more often than boys. One of the biggest risk is child marriage: of all women aged 20-24 in sub-Saharan Africa, 12 % had been married or in union by age 15, and even 38% by age 18. And this is only one of several severe risks for girls.

“I don’t see a lot of female lawyers in position and I want to study law. I hope to be a very well-known lawyer”, says Seble, an ambitious 15-year-old. Seble has already made it to grade 9, which allowed her to receive fundamental education. Still, to achieve her dream, she has a long way to go. During adolescence, obstacles for girls increase. One of them is unintended pregnancy: more than every fourth girl in Africa gets pregnant before the age of 18. Also, girls over 15 are 2.5 times more likely to be infected with HIV than boys of the same age group. Finally, there is another challenge which affects all girls: menstruation. If girls don’t have access to hygiene products like sanitary towels, tampons or menstrual cups, they might miss school for days every month.

But let’s focus on what can be done: what will help to ensure that Seble’s future goes the way she desires? She needs access to sexual education, contraception, health facilities, and menstrual hygiene products. She also needs to live free from gender-based violence. Under these conditions, she can stay physically and mentally healthy, prevent pregnancy and manage her periods without letting them affect her studies. This is fundamental for her to reach college and build her career.

The good news is: there are already progressive commitments to ensure a bright future for girls like Lelise and Seble. The Maputo Protocol, which 51 African countries have signed, is a powerful document for women’s and girls’ rights, tackling the topics mentioned above, like gender-based violence, harmful practices, HIV & AIDS, sexual and reproductive health and rights. The Maputo Plan of Action is currently in its second stage, running from 2016 to 2030.

While progress has been made in the last years, reality still lags behind these commitments. If governments and societies do right by girls like Lelise and Seble, the future will look brighter not only for themselves but also for their families, communities, and societies as a whole.

Check out how we stand by girls and women on our #RightByHer campaign website!