It’s exactly one week since our epic two days at this year’s European Development Days (EDDs), Europe’s leading development forum in Brussels and I can safely say that we have finally recovered! This year’s understandably popular theme was: ‘Addressing inequalities: Building a world which leaves no one behind’, so our ‘Right By Her’ stand fitted in perfectly. All eight partners came together to promote our work on the campaign, which highlights the gap between the rights that women and girls in Africa are owed, with the realities that they are actually facing.

At the #EDD19 with #RightByHer & #EUgirlsweek!
Join us now in Room S2 & over the 2 days at Stand 32!🙌 #ThinkTwice pic.twitter.com/iwFDquiePM

We were in good company, sharing the space with over 100 other stands, many of which were notably also promoting Women’s Rights, such as One’s #GirlsCount stand and EUTF’s ‘Women For Peace’ campaign. The stands were as colourful and interactive as ever – we contributed by asking people to pledge to stand ‘Right By Her’ by having their photo taken in our special photo-booth at the event and we certainly got some star models striking a pose (see below for evidence!).

RightByHer also featured on the schedule of over 130 fascinating lab debates from every equality-related development topic you can think of from ‘Does equality in peace matter?’ to ‘Journalism against misleading communication about migration’, featuring high profile (and sometimes controversial) speakers, notably former UK Prime Minister Tony Blair.

Our lab debate was on the topic of ‘Standing #RightByHer: Leaving no woman behind’, and looked at the challenges women and girls face with regards to sexual and reproductive health and rights in Africa and Latin America’, with some incredible speakers, including, Maria Salvador, Women’s Rights Coordinator at Alianza por la Solidariad, Anouka van Erdewijk, Senior Advisor Gender at KIT Royal Tropical Institute, and Vitalis Mukhebi, International Advocacy Officer at Faith to Action Network. The debate highlighted some of the shocking statistics from the State of African Women report that just show how far there is to go in this area, such as that in sub-Saharan Africa, 4 in 10 women are married before the age of 18. 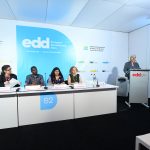 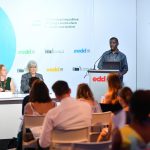 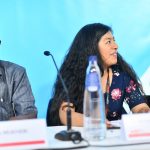 As Angela Bähr, a Programme Director at DSW stated in the debate, it became clear that ‘’we have a long way to go if we are to achieve the UN’s Sustainable Development Goals by 2030 – ensuring all women and girls around the world can live healthy lives, be able to have full control over their body, sexuality, health and relationships without any form of coercion, stigma, discrimination or violence’’. However, solutions were also discussed and the importance of working in partnership and with stakeholders to combine knowledge, skills and voices, is key to future success.

However, there is no time to waste in moving forward and although the EDDs were thought-provoking and encouraging, we at Right By Her took away a renewed sense of drive to not just talk about change within the sector, but to make it happen. This urgency was articulated by one of the members of our lab debate, Adriana Mendoza, a youth activist from Bolivia:

“We (youth) are not the future, we are the present”

So as we look forward to the next months of campaigning and advocacy at Right By Her, we will take that thought with us and work with that in mind