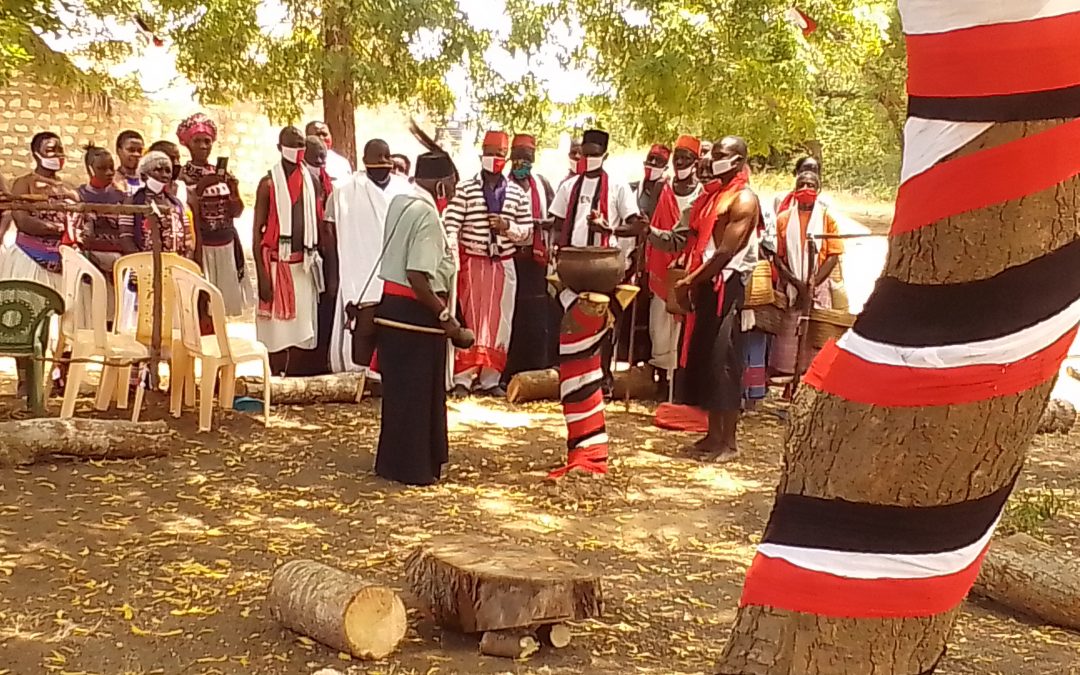 Africa has many civil society organisations (CSOs) that serve their communities, including women, who, despite their pivotal role in community and family well-being, are often marginalised and under-prioritised. The State of the African Woman Campaign (SoAWC) was designed to support these organisations’ use of advocacy as a strategy to leverage their nascent knowledge about the needs of women in their communities to create progressive policy and social change. This case study tells the story of how, in September 2020, a network of nine Bantu-speaking Mijikenda ethnic clans along the coastal strip of Kenya successfully used advocacy to reintroduce Mijikenda traditional court, with the intention to enhance access to justice in their communities.

The Kaya Elders Association of Kenya

The Kaya Elders Association is a network of traditional elders from the nine Bantu speaking Mijikenda ethnic clans along the coastal strip of Kenya. It was established in 2014 to advance a mission to preserve culture and pass it on to young generations in order to improve their health, welfare and beliefs while upholding the human rights of all persons. As with many traditional cultures, the traditions and cultural practices of the Mijikenda people were rapidly diminishing and the loss was eroding the social fabric and cohesion that held community members together over the years.

How the Kaya Elders participated in SoAWC

In 2018, the Kaya Elders Association participated in advocacy capacity-strengthening sessions organised by the Faith to Action Network (F2A). The sessions were designed to assist F2A partners in developing their organisation’s advocacy strategies. Kaya developed a strategy that identified, among other actions, the need to re-institute the Mijikenda traditional court in order to improve access to justice. This idea was inspired by the Kadhi’s court, which applies Islamic law to resolve private issues of interested Muslim followers in Kenya. Kaya Elders noted that, unlike the modern public courts of the government, the Kadhi’s court went a step further to provide the court attendees with guidance, legal advice, then made arbitration and rulings in a confidential, fair and user-friendly manner.

‘F2A often has called me to meetings to go and learn more. Even human rights I learnt from them. They also update us on emerging issues. We need them to now come to the ground and work with us closely in implementing what they have taught us.’ Boniface Tsuma, Kaya Elders Association

Before national independence was won from the British colonial invasion in 1963, the Kaya communities had their own traditional court that used customary laws to resolve community conflicts and cases. After independence, the roles of the traditional court were moved over to the government courts, causing the former to lose visibility and recognition over time. The traditional courts gradually transformed into a process in which the local Sub-Chief or Chief selects a few community members to advise decisions during the resolving of local conflicts. Kaya argues that access to justice was lost. As an example, Mijikenda customary law prohibits a husband from beating his wife and requires him to request the aid of her relatives to resolve their matrimonial disagreements. In the modern justice system, husbands beat their wives without punishment, especially if they are financially endowed. Women in particular often cannot access justice because they have a lower social standing, no resources of their own, and it is difficult to make their voice heard and supported.

The Kaya Elders Association felt that there have been several challenges in the justice system that came into place since independence. Courts often had a huge backlog, resulting in long delays in resolving cases and thereby delaying access to justice. This was particularly true for people that lacked the connections or money to fast track the process. Additionally, those who made decisions in the justice system did not necessarily understand the ways and customs of Mijikenda people, causing dissatisfaction with some of the rulings. For ordinary citizens, particularly women, it has been very expensive and sometimes imposssible to hire lawyers to represent them in modern courts, yet the communication and language style of courts is so complex that many citizens could not successfully explain their issues and defend themselves. There is no mechanism within the court system to capture community members’ opinions and listen to the voices of the people, especially those of women.

‘We worked with F2A to identify ways and means to create peace and harmony within families and within communities.’ Boniface Tsuma, Kaya Elders Association

Without justice, aggrieved persons sometimes became frustrated and resorted to various acts of violence in an attempt to correct the unjust situation. For instance, the courts did not handle cases of witchcraft, leading to community members killing persons suspected to be witches without any judicial process. Elderly women suffering from eye infections or other ailments that cause reddened eyes were particularly vulnerable to being targeted as suspected witches by community members.

By the 2018 annual Chenda Chenda festival, the Kaya Elders started undertaking various advocacy, awareness and communication measures to have the traditional court re-instituted to enhance social cohesion among the Mijikenda people. The elders first collected evidence from the community concerning the need to re-institutionalise the traditional court, then proceeded to develop and communicate advocacy messages to support the need for the court. These messages were communicated through radio, public community meetings, deliberations with various leaders and decision makers, and public campaigns during Chenda Chenda and other festivals.

Over the past two years, the Kaya Elders received all types of additional support in order to make the dream of having the court a reality. Private lawyers from the Mijikenda clans provided pro-bono legal support, handled legal processes and documents for re-instituting the court, and donated the required legal fees. The Malindi Rights Forum shared pertinent knowledge and experiences concerning human rights and legal issues. The Magarini cultural center also gave advice on matters of culture and customs of the Mijikenda people. 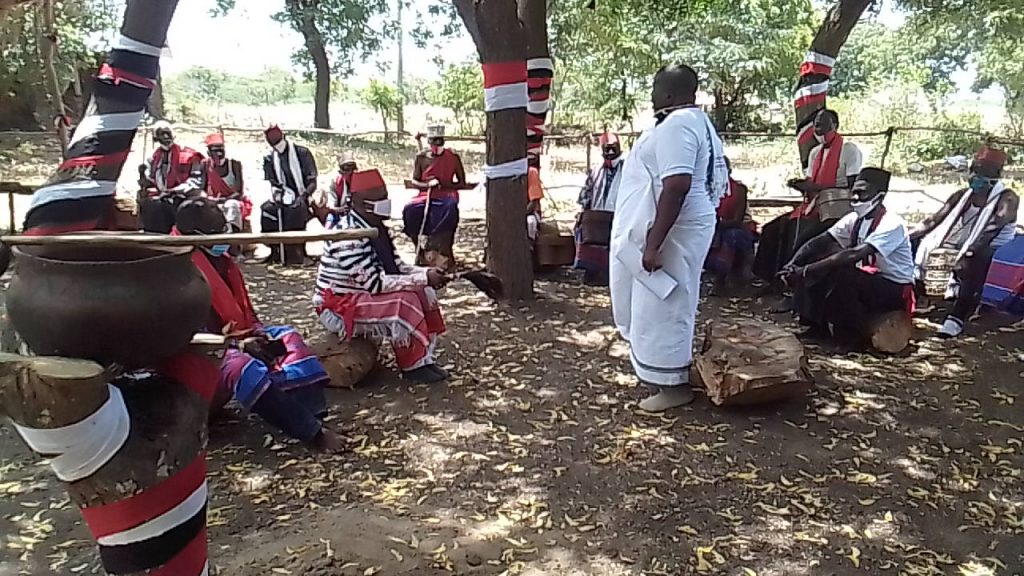 ‘We started advocating the need to have the traditional court re-instituted way back in 2018. During the Chenda Chenda festival of 2018 we announced the need for the court and then built support and awareness until the idea came to fruition with the launch on September 9, 2020.’ Boniface Tsuma, Kaya Elders Association

The Mijikenda traditional court was finally launched on September 9, 2020 in Magarini in Kilifi County in the presence of important community members, government officials, and other collaborators. The main roles of this court is to ensure that it arbitrates, rules and resolves cases presented by community members; educates government decisionmakers and community members on legal and customary laws, including their rights and responsibilities; and obtains feedback from community members on pertinent public issues like political governance and then represents their voices to decisionmakers. The court will mainly focus on handling sensitive and private cases where the individuals wish to share their issues not with the government but rather with someone who understands their context. The re-instituted traditional court will cover the entire scope of issues that affect the Mijikenda people, including but not limited to politics, leadership, land conflict, violence, disagreements, marriage and family issues, domestic violence, tourism, natural resources, epidemics and security.

The three levels of the court are presided over by representatives of the Mijikenda clans. The lowest level, called ‘Kambi’, has one elder from each of the nine Mijikenda clans. These are elders who advise and guide decisions of the court based on their robust knowledge of traditions and customs of the Mijikenda. The second level of the court, known as ‘Nyere’, is also made of nine administrators representing each of the Mijikenda clans. The administrators undertake the main task of community outreach to ensure laws are implemented and executed. For instance, they travel to the locations of conflicts in order to adjudicate and judge disputes in ancestral lands or to intervene during domestic abuse. They also hand over any case that seems to be too hard for them to resolve to the next level. The highest hierarchy is called ‘Vaya’ and is made up of chief judges who have been trained in the law and taken an oath of allegiance to protect social order and justice in the community. These judges are influential, respected and accepted elders who have an in-depth understanding of the laws and the social and cultural norms and values of the Mijikenda community. The nine judges are also drawn from each Mijikenda clan. A case solved under this level is final. It is possible to appeal to any court of the Kenyan government. The judges can also refer the case to any Kenyan court.

The Kaya Elders Association is viewed as an opinion leader with a voice that is respected and listened to by the Mijikenda community and government. However, the Association still faces a shortage of funding to move the court to the next step, ensuring that the judges are able to review existing laws and customs, and debate and agree on the set of customary and government laws that it will apply and execute. There is also a need to promote and publicise the court so that citizens can start participating in its proceedings and taking advantage of the services it provides. The court is now mobilising resources to cover the costs of its other operating expenses, such as training the court staff, including judges; honorarium or allowance of the judges; and the payment of technical assistance and other human resources of the court.

The court will be an organ that consolidates strength of the community to hold duty bearers, including government staff, accountable. It is hoped that the court will create social order, harmony and good relations among community members but also between the community and government legal systems.’ Boniface Tsuma, Kaya Elders Association