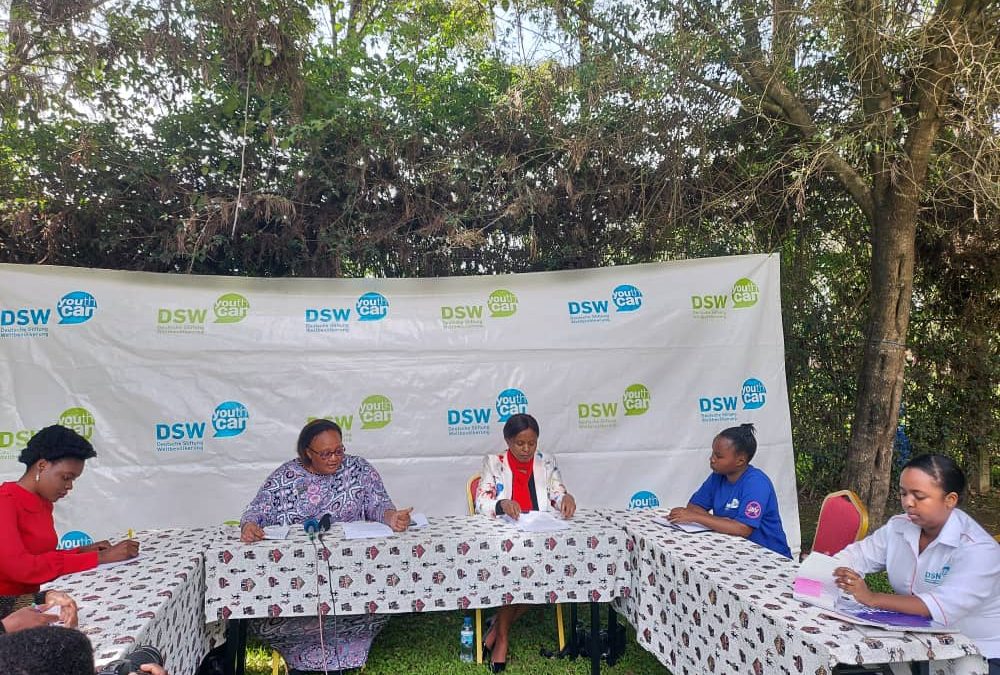 Historically international women’s day begun nearly a century ago. It grew from a labor movement, when women demanded fair and equal wage. In 1975, UN formally started to celebrate international women’s day. On the 5th March 2021, DSW Tanzania celebrated International Women’s Day with the 2021 theme of ‘’ Women in Leadership; Achieving an equal future. DSW Tanzania prepared a panel discussion which revolved around women who are in top leadership government positions, Female national Youth champion, women in science, a woman champion and a leader in her community. The main aim of the panel discussion was to acknowledge how far women have come in their societies in terms of attaining leadership roles and how DSW Tanzania is in the front line of advocating for girls and women opportunities.

The event involved 4 key media houses- Azam, ITV and Citizen. The event was designed with a panel discussion of women in leadership positions talking about how women given the chance can change the status quo.

Ms. Erena stated that the regional office is working to eradicate women and girls violence through the implementing the Tanzania National Plan of Action to End Violence Against Women and Children (NPA- VAWC). She applauded the DSW team for their advocacy programs and projects that directly addresses the NPA-VAWC and that the plan strengthens pillars that uplift women to take up space in leadership roles.

Ms. Blandina Nkini Regional NGO register and Community development officer addressed the issue of increased assets ownership of Maasai women. She stated that ‘’ government interventions and various community development actors have enabled women in the Maasai community to own their own assets, which before it was a cultural taboo’’.

Ms. Aretha Alicia Advocacy and Communications officer addressed how self-help groups in the projects have been able to empower youths economically and that 77% of management position in the youth clubs are managed by Young adolescent girls and young women projects. She also stated that the DSW Tanzania advocates for gender equality through DSW gender equality policy.

Rehema Salim, a woman champion, women group leader and  also the head of women led entrepreneurs in the northern zone. Rehema has been able to participate in the village council election and has a sit in the round table village meetings. Her Self-esteem and financial stability reflects the trainings that she acquired   from DSW projects. Rehema expressed confidently ‘’ I’m now able to support my family and become a mentor to other women on how to become independent’’.

Another panelist who is also a volunteer and youth champion Tumaini Khatib-. Tumaini who is an Engineer and registered in the board of engineers has been able to showcase to girls and women that it’s possible to take up space in the world of science as  in the 21st century women are encouraged to partake in science led initiatives and jobs. Tumaini who is a volunteer of DSW spoke boldly on the essence of women and girls taking up leadership positions in the science space ‘’ I encourage women and girls to deep dive in science subjects, I believe every girl and woman can’’.

Mwanaima Mbaga, National FP youth champion stressed on the importance of girls acquiring the right information about SRH and FP.  She   addressed the need of increase of FP budget at the district level and acquisition of SRH youth –friendly services. Moreover, She has participated in national and international events such as International youth week, East Africa leadership summit were she participated as a panellist exploring her role as a DSW Champion  capacity building of SRH and FP for youths, Mwanaima stated that ‘’ I’m not only an empowered girl but also a degree graduate holder at the university of Dar-es-salaam’’ expressed Mwanaima Mbaga during the panel discussion.

It is upon each and every individual at the Government, Stakeholders, Development actors and community to support the initiatives of empowering women and girls. As Mwanaima Mbaga National Youth FP champion mantra is ‘’ BINTI NA MAENDELEO’’ meaning girls and development.