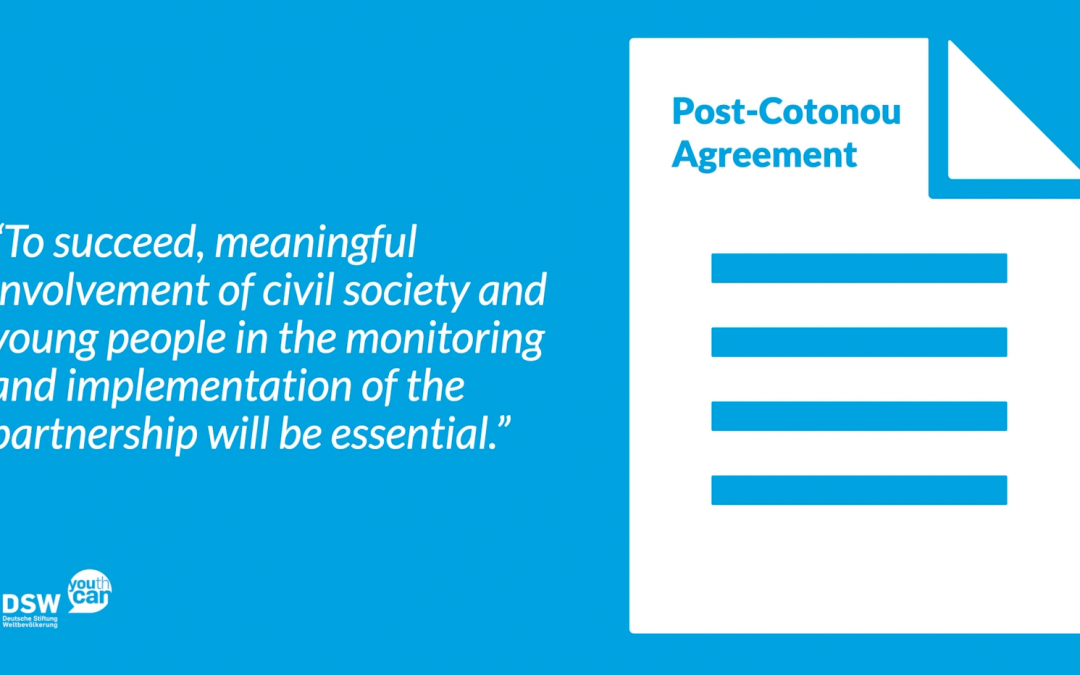 “DSW Explains” is a new video series where DSW’s EU team explores some of the key EU policies related to global health R&D and sexual and reproductive health and rights (SRHR) in a short and accessible way.

In the 2nd episode of the series, our Advocacy Officer, EU Gian Marco Grindatto talks about the post-Cotonou agreement: what it is about, and what it entails for young people and SRHR. At the end of the video, Gian Marco also shares some recommendations for the implementation phase.

The post-Cotonou agreement is a partnership agreement between the European Union and 79 countries from the Africa, Caribbean and Pacfic group of states – the so-called ACP countries. The current agreement – the Cotonou agreement – was signed in 2000, and ends in 2021. The new framework for EU-ACP partnership has been negotiated, and a preliminary signing of the text took place in April 2021.

The new, legally binding agreement will guide relations for the next 20 years, addressing common future challenges.

What does the new agreement entail for young people?

The new agreement recognises the key role of youth as actors of change, committing to promoting their active participation in society, including in the development, implementation, and follow-up of policies affecting them.

The new partnership also provides a step forward in the promotion of sexual and reproductive health and rights (SRHR). SRHR is key to ensuring young people can lead healthy, self-determined lives and fulfill their potential.

However, the new agreement falls short of clearly recognising sexual orientation and gender identity, which often intersect with other vulnerabilities, exacerbating inequalities and discrimination.

What are your recommendations to implement the new post-Cotonou agreement?

It is crucial that the agreement, once ratified, is fully implemented by the EU and ACP countries, and that the strong commitments within it, including the regional protocols, are translated into concrete actions.

To succeed, meaningful involvement of civil society and young people in the monitoring and implementation of the partnership will be essential.