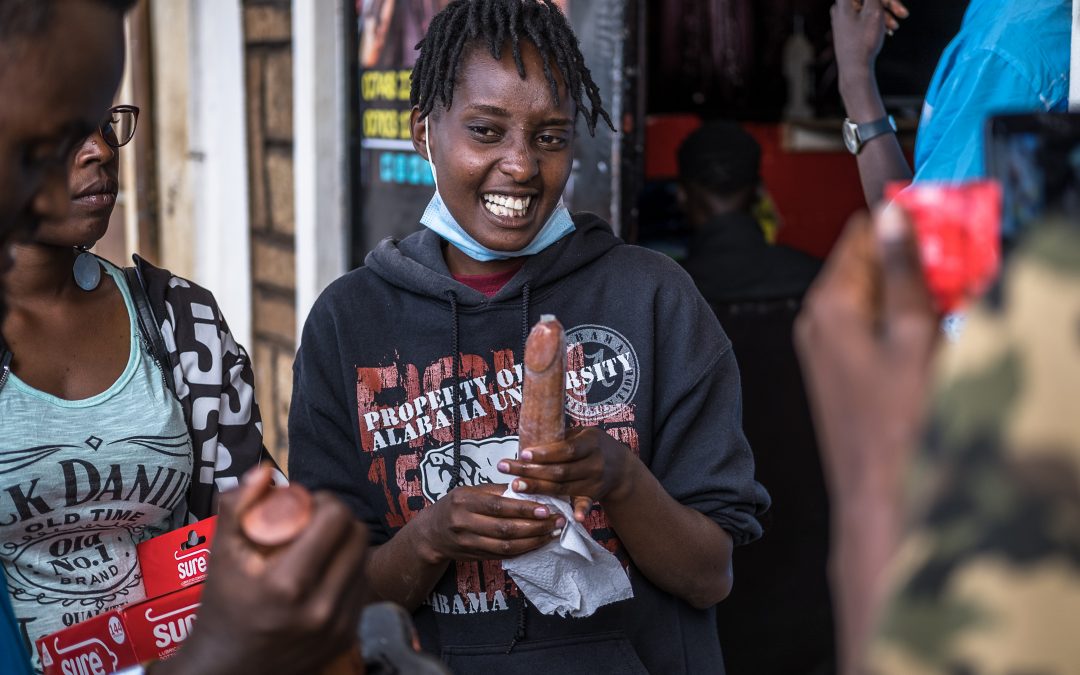 The sun in Eldoret is high up in the sky as we snake our way to Langas, a low-income settlement off Airport road. The heat is unrelenting as we meet a group of residents keen to discuss issues on family planning.

Many are afraid to be on media; family planning is a private issue ­— sometimes even taboo in a county where culture frowns upon matters sex and sexuality.

Ruth Mwangi is not among this group. She is confident to inform us about why ‘family’ —as they call it— is vital for them. Ruth has been on the implant since 2014 after she had given birth to her only child.

“Haikunipeleka poa (It messed me up),” she starts, “the side effects were quite stressful, but I stuck it out until the five years were over.”Some of the effects included reduced appetite, weight loss and just general sickness. When the time lapsed, she needed to have it removed. However, she faced a new challenge.

“I went home and told myself, what happens will happen. Fortunately, there was a contraceptive campaign in a nearby church and I had a new one inserted for free,” she adds.

According to the Ministry of Health (MoH), 6,321,000 women use modern contraception in the country, bringing the rate to 61 per cent. However, 17 per cent f women of reproductive age have an unmet need for family planning.

Now, the future looks bleak with the news that donors are slowly weaning off the country funding for family planning following its elevation to middle income.

With this development, people like Ruth will be forced to decide between daily upkeep such as food and a commodity such as implants. In most cases, family planning commodities will take a back seat.

This was the case for Florence Nyokabi who had to drop out of Class Eight to have her baby. With only primary school education and no resources, she is currently dependent on free services and drives for family planning.

“After the baby, I went on the three-month injection. The problem with this is that sometimes you do not have the money for it. On the other side, the child has needs and in some cases, the child’s father does not help,” she explains.

When the free family planning drive came to the area, Florence picked the five-year implant to protect herself from pregnancy and to avoid the challenges with short term options.

Besides such economic factors, youth in the area are still grappling with myths and misconceptions about birth control.

Suleiman Mwangi, 22, says he is worried for his fellow youth who keep on ignoring the reality of unplanned pregnancies, sexually transmitted infections and HIV and Aids.

“There is this phrase: huwezi kula sweety na karatasi (you cannot eat sweets in their wrappers) that the local guys say. It is not that they don’t know about contraceptives. They do, they just ignore,” he adds. As a young man who uses condoms, he also distributes them to his colleagues in the area.

“Sometimes when I go to public hospitals, they do not have them. I often buy them at chemists or at wines and spirits and give them out for free,” he says, adding that most young men in Langas do not bother whether their partners are on birth control or not.

“They are less concerned. Many are more scared of Covid-19 than they are of HIV, and other diseases,” he says.

Steve Biko, youth programme officer at the Family Health Options Kenya (FHOK) Eldoret Youth Centre, says there is a long way to go when it comes to family planning in the county.

“The push for family planning started about 10 years ago. Before that it was a no-go zone and discussions were at the bare minimum. Today, facilities are trying to improve uptake, and there have been partnerships between government and non-governmental organisations to facilitate use and access,” he says.

However, obstacles are still many. For starters, the county is still dependent on donor support, so sometimes the commodities are available and other times they are not and may miss in some facilities and be available in others, making it a guessing game for users.

The absence of the budget line could be problematic for the county, especially with the donors not giving out funds for the same by 2023.

“When the funds are phased out, the development partners are pushing for counties and governments to stand on their own,” Biko adds, saying that without a budget line, any money meant for family planning would be used in other sectors under health.

“It is important to plan and budget early enough; 2023 is not that far, and if we wait until that time, that will put access to services at risk, because the priority would go to other people such as the married and not the young ones,” he adds.

He explains that the situation will be sad because Uasin Gishu county has a number of colleges and institutions with a lot of young people coming in from other counties who might need services and not access them.

Already young people are calling for the establishment of youth-friendly centres, which was a priority of the government according to its County Integrated Development plan (CIDP) 2018-2022. Under this plan, Uasin Gishu county government committed Sh60m for 18 such centres between 2018 and 2020.

They had also committed Sh5m for 30 health facilities that offer youth-friendly services. None has been established yet.

What’s even worse, the Council of Governors’ Reproductive Health/Family Planning Rapid Assessment Report 2020 indicates that Uasin Gishu has been having stock-outs between January 2019 to June 2020 on all commodities including condoms.

This, Biko says, in his personal opinion and experience, is not by accident. “Population is a good business for politicians. Higher numbers equal higher allocation of funds. A faulty argument.

Secondly, there is nothing to show for family planning compared to, for example, road construction, which is there for all to see. What will you show? How will you prove? Third, it is not a lucrative business. Some big projects come with kickbacks; that is not the case for family planning,” he explains.

Being that a lot of family planning programmes are donor dependent, any drop in funding will put pressure on organisations such as FHOK and others in the family planning area to fill the gap.

“Through the programme we were able to reach between 4,500 and 6,000 young people monthly. However, with reduced funding, I foresee a drop in uptake despite demand for service, which is a national challenge,” he explains. He calls for a shift in focus and prioritisaton of resource allocation by counties.

“Government should work with private entities and other established institutions to pump resources, reach out to young people and boost infrastructure around family planning,” he says.

Dr Joseph Mbai, Chair CECs for Health in observing World Contraception Day on 26th September said already they are engaging the county assemblies to put line budgets to ensure they have line budgets to have budget line activities.

“And not necessarily commodities, but for skills transfer, training mentorship and making sure that people are made aware of the different family planning choices,” he said.

It is not the first time the country is being weaned off donor funding. According to Evelyn Samba, Country Director, DSW Kenya in this opinion article, has witnessed a total breakdown of health services after such planned transitions of funding.

“In 2019, the Kenya National Blood Transfusion Service was crippled after a planned transition from the US President’s Emergency Plan for AIDS Relief (PEPFAR) funding to Government of Kenya’s own funding leading to a shortage of blood for medical use,” she says.

She adds, there has been commitment by government to domestic funding with the most recent at the 2019 International Conference on Population and Development, Nairobi Summit, where President Uhuru Kenyatta said the country will gradually increase funding for contraceptives from domestic sources.

“It is, therefore, crucial that the transition to Government of Kenya funding for contraceptives is managed well to prevent a similar disruption of family planning services due to lack of commodities,” she adds, calling on the MOH to spearhead the efforts to procure the necessary commodities in line with its commitments and agreement with development partners to ensure continuity of the family planning programme.

This article was written by Nduta Waweru and was originally published in Kenya’s newspaper ‘People Daily’ on 27th September 2021.