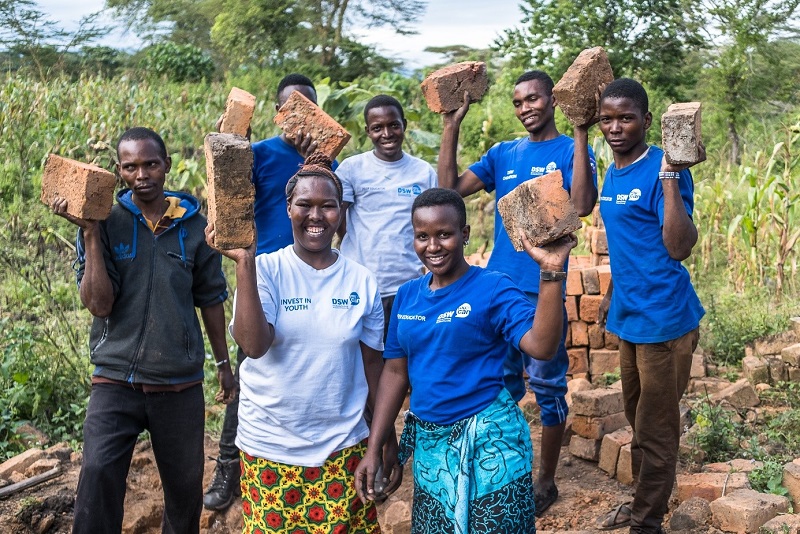 Tanzania has one of the highest teenage pregnancy rates in the world. Deutsche Stiftung Weltbevölkerung (DSW) and its partner organisations are working to ensure that girls and young women in East Africa can make their own decisions about their bodies and lead self-determined lives.

For far too long, Anna Urio did not know she was allowed to say no. For far too long, she did not know that only she was allowed to make decisions about her body. And for far too long, she did not know how to protect herself from sexually transmitted diseases and unintended pregnancies. Then she became pregnant. When her boyfriend found out he was going to be a father, he panicked. His first reflex was to leave his pregnant girlfriend. However, once he got over the initial shock, the young man decided that he and Anna would take responsibility together for what they had not intended. Anna’s stepmother reacted differently. When Anna could no longer hide her growing belly under her loose robe, she simply kicked her stepdaughter out. With no fixed income, Anna and her boyfriend had to rent a small accommodation, which would become their daughter’s home a few weeks later. Anna was 19 years old at the time. 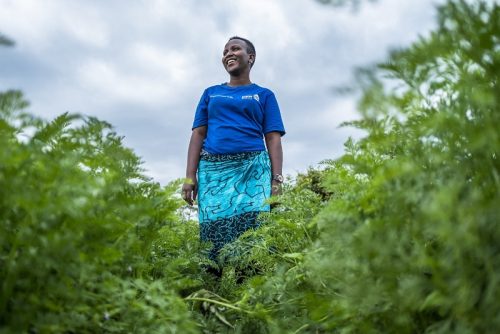 Anna Urio, 24, from Tanzania hopes that DSW’s projects can continue to provide a lot of help for self-help.

In the meantime, Anna’s daughter is now four years old. Anna loves her more than anything – and yet she would have preferred to decide for herself when she would give birth to a child for the first time. In Anna’s homeland in northeastern Tanzania, there are many girls who – like Anna – become mothers very early. Lack of sexuality education and the taboo surrounding sexuality education and contraceptives mean that Tanzania has one of the highest teenage pregnancy rates in the world – and the trend is rising. One in every five births in Tanzania is the result of teenage pregnancy. For the young mothers, who are often still very young themselves, an unintended pregnancy almost always means that they have to leave school without graduating, are forced into marriage with a man who is often much older than them, and cannot lead their lives in a self-determined manner. Together with its local partner organisations, Deutsche Stiftung Weltbevölkerung (DSW) is working in Tanzania to enable girls and young women to make their own decisions about their bodies and lead self-determined lives. Anna Urio, who is now 24 years old, plays an important role in this.

Anna skilfully catches the brick weighing more than three kilos that her friend Mikaeli throws to her. Together with her friend Rose and other members of the DSW-supported Ndili youth club (Swahili for “the well that never runs dry”), Anna made the bricks from sand, clay and straw, then piled them up to harden in a cornfield on the outskirts of her home village of Mkoansio. It is exhausting and sweaty work – but Anna has never heard any macho talk from her male friends and colleagues. In the youth group, Anna and her female friends have not only learned how to make bricks, which they will later sell. They have also learned how to assert themselves confidently in a society that is still patriarchal. 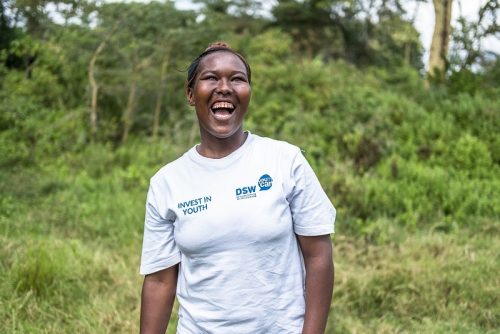 Rose Nasare is married and the mother of a little girl. She raises chickens, grows vegetables and wants to open a store.

“Before I knew anything about the programme, we had a group that we used to meet as youths. I joined the program because, as a youth, I had nothing to do in the community. I was just idle.” Anna proudly reports. In addition to agricultural and handicraft training, Anna and her friends received financial start-up support from DSW to set up small businesses. The young entrepreneurs now raise chickens, pigs and fish, grow fruit and vegetables, engage in forestry, make handicrafts and soap, and sell their products in their own small stores and at the market. For the young women in particular, as their economic success grew, so did their self-confidence and standing in their communities.

“In this community, the ones that become parents first are the girls. Boys quickly convince girls, but since we have been taught about reproductive health, things have changed. It is not like when girls were easily swayed with money to take part in (unprotected) sex in the past”, Anna reports proudly. Anna herself has helped reduce the number of teenage pregnancies and sexually transmitted diseases such as HIV, syphilis and hepatitis in her rural community in northeastern Tanzania.

“When youths start being sexually active, it is tough for them to share this with their parents because it is hard for youths to share them. It is because of the traditions. And also, our parents are so much into traditions that communicating with them such experiences becomes difficult”, Anna reports. There is also hardly any sexuality education in schools. Talking openly about sexual intercourse, family planning and sexual self-determination is still taboo in conservative Tanzania. As a result, many girls do not know how to protect themselves against unintended pregnancies, illegal abortions are performed in secret, and the young mothers-to-be often die in the process or suffer injuries and trauma that accompany them throughout their lives. 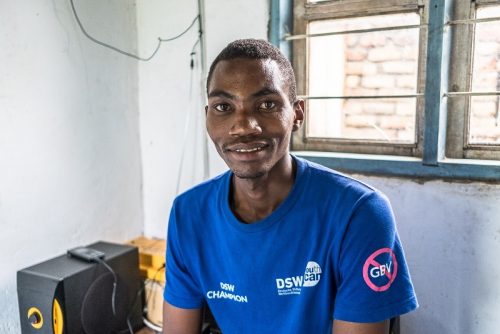 “The voices of the youth are heard. This is because of the education and training at DSW,” says Baraka Malachi.

In addition, girls and women in Tanzania, a country with approximately 55 million inhabitants, become infected with HIV/AIDS and other sexually transmitted diseases at an above-average rate. A patriarchal system with poor educational opportunities for girls, extremely high youth unemployment, poverty that forces girls and women into prostitution, and harmful socio-cultural practices such as child marriage and female genital mutilation are considered the main causes.

Since 2006, DSW has therefore been involved with its local partner organizations in the East African country through sexuality education programmes, income-generating measures, youth clubs and raising awareness among doctors, nurses and caregivers, among other things. Sexuality education without pointing fingers and the empowerment of girls and women have proven to be very effective tools. “I know that I have a right to say no or yes to sex. I was taught that at DSW. My sexual rights are respected as I am the one to make the decision”, Anna says in a firm voice at a youth club meeting. At workshops and seminars, she now passes on her new self-confidence to younger women and girls.

“Gender inequality issues have been reduced ….. At the moment, there are no harmful traditions in my community. Earlier on, there were such cases. I think it is because of the education we are being given. We now dare to stand against such ill traditions. We can even tell our parents what we cannot do and report such cases to the authority.”, says Anna. In addition to so-called harmful traditional practices, domestic and sexual violence is a major problem in Tanzania. The East African country, which is heavily dependent on tourism, was hit hard by the COVID-19 crisis. When many parents lost their jobs and schools were closed for long periods during a harsh lockdown, it is estimated that violence against women and girls continued to rise.

On her way back from the market, a man from her neighbourhood tried to rape Anna’s friend, 23-year-old Rose Nasare. Rose was able to free herself, run away and report the attempted rape to the police. A rare exception. Because of shame and fear of stigmatisation and revenge, most perpetrators are never brought to justice. The youth clubs supported by DSW want to change that. The groups are also discussing how violence between adults and children and men and women can be prevented.

“My life changed after I joined the program in my way of thinking and realising my full potential”, says Rose, who learned how to be a successful farmer, raise chickens and run a small business, among other things, at the youth group.

Girls and women who can successfully run businesses and thus provide for themselves rarely have more children than they want and can provide for. This is shown by the experience of many other DSW partner countries. An important prerequisite for this is unhindered access to contraceptives. Condoms are freely available at most health centres in Tanzania, but many young men still do not use them. Because they never received sexuality education classes, they often do not know how to use condoms properly. Other unmarried men and women are afraid they will be seen getting condoms, which could bring to light that they are having premarital sex. 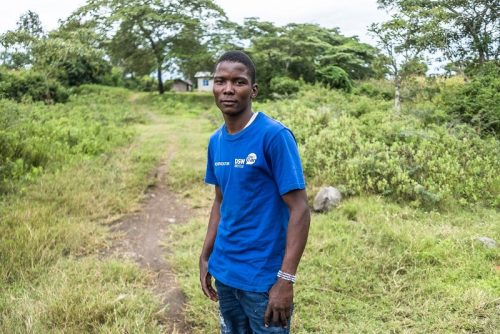 “Through this programme, I have discovered my full potential.” – Mikaeli Emmanueli Palanjo. Mikaeli no longer takes drugs, instead he cares about other young people and his future.

For this reason, 22-year-old Mikaeli Emmanueli Palanjo often obtains condoms for young people in his community and discreetly passes them on to his peers. To ensure that all young people in Tanzania have the confidence to access contraceptives themselves as soon as possible, he is working with the Ndili Youth Club to ensure that health centre staff do not condescend young people seeking help and advice – as has often been the case in the past – but treat them with respect and empathy.

Mikaeli, Rose and Anna are not isolated cases. Involvement in the youth clubs supported by DSW has already made a lasting difference to the lives and future prospects of many young men and women in Tanzania. “I am so happy that this programme has been of great importance as I can see a change in our youths. There was gender-based violence and FGM, but now I see that these cases have been reduced … This programme has helped this community a lot. The voice of the youth is now heard.” says 49-year-old Herieth Solomon, who works with several youth clubs in north-eastern Tanzania on behalf of DSW. 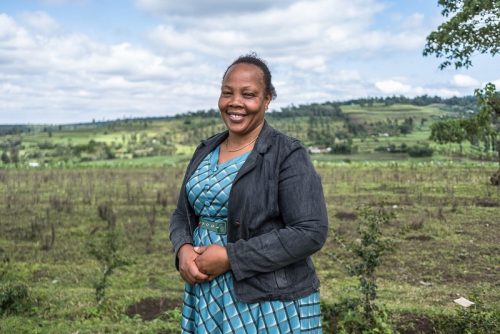 “I am so happy that this programme has been of great importance as I can see a change in our youths.” Herieth Solomon concludes.

Anna is one of the participants who went from being a shy girl to a confident woman as a result of her involvement in the youth club. Anna now knows that she can say no. She knows that only she is allowed to decide about her body. She knows how to protect herself from sexually transmitted diseases and unintended pregnancies. Anna is part of the generation hope in Tanzania.

This article was first published in German in the December 2021 edition of the Centaur magazine.