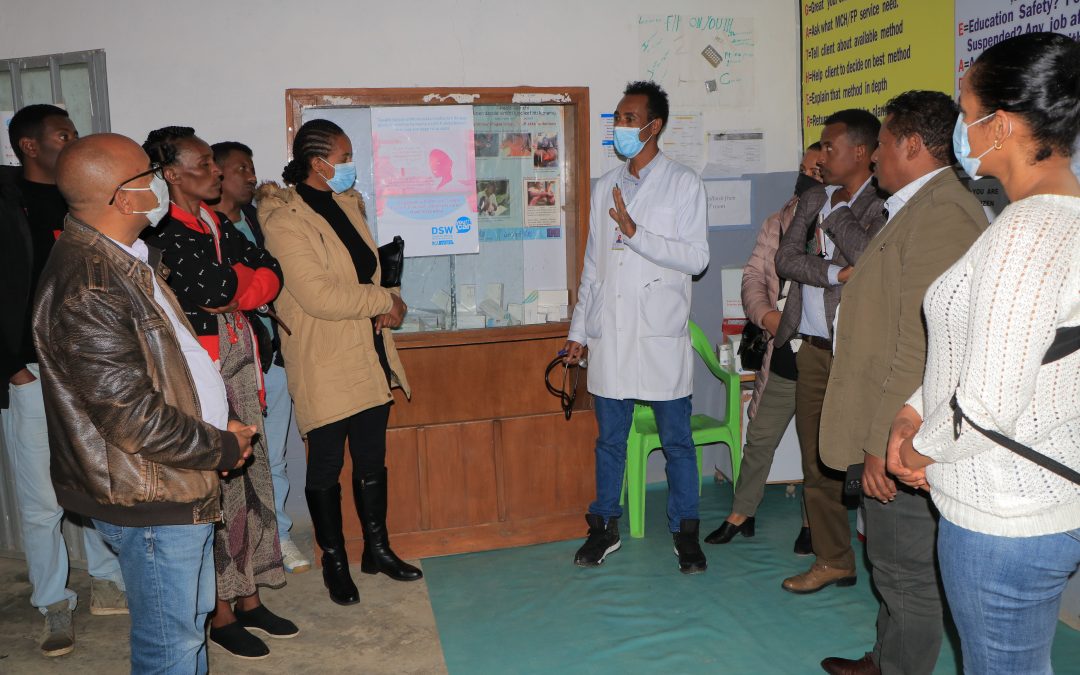 For the first time in many months since the peak of COVID-19 pandemic, a field visit of the Healthy Youth at Work (HY@W) project funded by the David & Lucile Packard Foundation in Ethiopia took place in Sebeta town, in the Oromia region on 16 August 2022. Sebeta town is one of the two project areas, along with another district nearby, where the project is being implemented by DSW. The project has been running for two years and the remaining year will see the conclusion of the project. HY@W was originally scaled up from a successful pilot phase.

Four members of DSW’s Ethiopian team accompanied representatives from the David & Lucile Packard Foundation to the project area in Sebeta, 23 kilometers southwest of the capital. The tour of the project included visits to two factories, mini-media activities, a peer-led discussion by the youth working in the factories, and a visit to the youth-friendly health facilities located at public health centers.

To give a full insight of how the project progressed, the two representatives from the Packard Foundation were briefed by the DSW team through informed discussions; before the specific site visits took place. A donor’s visit such as this always includes the presence of government stakeholders in which officials from the regional health bureau and other relevant offices are represented.

“Five years back, we piloted a workplace intervention for the first time targeting what we referred to as the underserved youth who were vulnerable to sexual and reproductive health (SRH) problems. By the end of the third year, we were able to disseminate SRH information, create demand for service provision and a good number of the youth working in the flower farms were equally able to make informed choices in their SRH needs. The positive impact observed in the first phase has validated the scaling up of the second phase of a project dubbed Healthy Youth at Work,” says Feyera Assefa, Country Director of DSW Ethiopia. 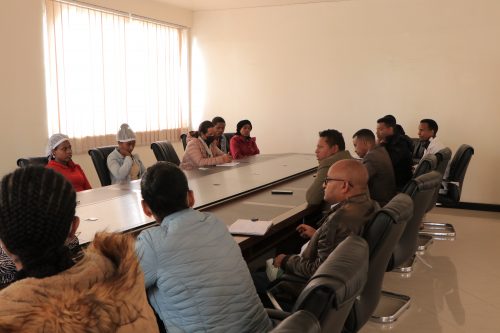 After lessons learned from the practices of the first phase, of what was considered then a pilot project, DSW expanded its thematic outreach by including cervical cancer as an integrated component of the SRH issues implemented during the scaled up second phase.

“The problem of cervical cancer viewed as one of the fast growing cases in Ethiopia and it was commonly understood that the potential vulnerability of the female employees working at the flower farms and other factories where our project is being undertaken has been and, by and large, still remains the challenge in public health. It was also the concern among donors therefore; we got the consent of the David & Lucile Packard Foundation to embed cervical cancer as a component to be addressed in our project. This has actually encouraged our effort to further incorporate the topic of cervical cancer into our modular adolescent and youth SRH manual of which a revised version was concluded over the recent past,” Feyera accentuates.

According to a recent study (BMC, 2022, Publisher of Peer-Review Journals), cervical cancer is the second most commonly diagnosed cancer among Ethiopian women – with findings rating mortality at an estimated 4,700 women per year. As a result, the Ethiopian government has ramped up the country’s first national cancer control strategy, information on patient and provider experiences in receiving and providing cervical cancer screening, diagnosis, and treatment. In line with these efforts, DSW devised an audio or digitalized format to disseminate over the mini-media activities about cervical cancer related information at the workplaces. 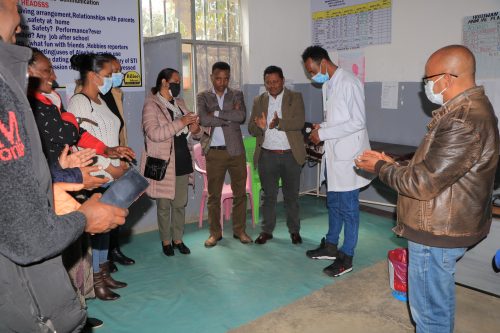 Impressed by the progress being made, Senait Tibebu, research associate at David & Lucile Packard Foundation praised the project’s achievement and further encouraged the digitalization of the social and behavior change communication materials outreach initiated by DSW. Digital based information can be disseminated faster and is often preferred by the majority of the youth.

“The workplace intervention that has been targeting working youth, who would have been by-passed as being safe, has come of age to gain strong recognition by government stakeholders after its first phase was launched and implemented by DSW some five years ago mainly in Sebeta, Barak District and Sendafa towns in Oromia Regional State,” explains Belaynesh Mekonen, Health Officer at Sebeta town health office.

Ms Mekonen further asserts that “although there are about eight hundred factories based in Sebeta alone, in addition to DSW’s 25 intervention areas at workplaces (seven flower farms and eighteen various factories), the Oromia regional state incorporated ten other factories in Sebeta to scale up the project model by taking the lessons learned from DSW’s good practices”. She added that this is one initiation worth replicating by others and advocating to reach out as many youth working in the various factories as possible, using the modality introduced by DSW so that it could be done so in synergy to address the youth SRH needs and the cervical cancer problem.

“From observing the whole praiseworthy activities at each of the project sites we visited, it gives a great deal of practical sense if advocacy is being pressed to take a central role for further implication on maximum outcomes of this interesting project,” emphasized Kassahun Gurmu, Program Coordinator with the David & Lucile Packard Foundation.

Financed and technically supported by the David & Lucile Packard Foundation, “Healthy Youth at Work” is an ongoing workplace project, launched two years ago after being scaled up from an earlier pilot intervention phased through a three-year period. The achievement attained so far, has encouraged DSW to venture into expanding its intervention with working youth at industrial parks found on the outskirts of Addis Ababa and Howassa of the Sidama regional state. 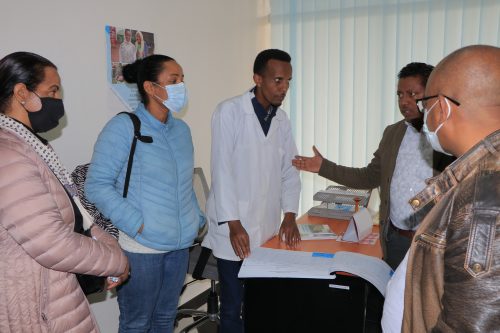