DSW youth advocates speak up for girls’ rights at EWAG 2022 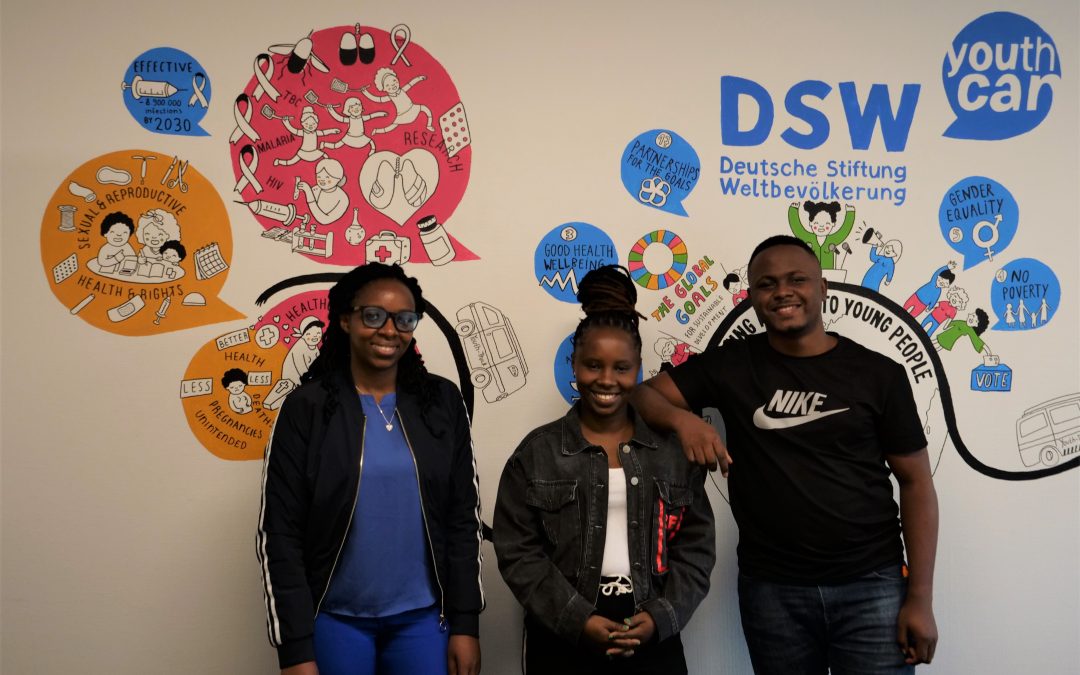 Between October 10 and 14, three DSW youth champions joined the 10th edition of the European Week of Action for Girls (EWAG) in Brussels, organised by a coalition of NGOs on the occasion of the International Day of the Girl.

John Jessy (Uganda), Burnice (Kenya) and Mwanaima (Tanzania) joined fellow young advocates from Africa, Asia and Europe in advocating towards EU decision-makers, calling for girls’ rights to be at the core of the EU’s external action, with particular attention to five priorities:  political and civic participation, Sexual and Reproductive Health and Rights (SRHR), harmful gender norms and stereotypes, youth economic empowerment, and inclusive and quality education.

Throughout the week, the youth champions had the opportunity to exchange with decision-makers from the main EU institutions. Here are the key highlights:

On Tuesday, youth advocate Claudia from Ghana opened the EWAG art exhibition “10 in 10: The world through the eyes of a girl”. The exhibition featured illustrations by five different artists from around the world, portraying how the world could look like for a 10-year-old girl ten years from now – if the rights of girls are fully upheld.

Burnice, our youth advocate from Kenya, emphasised the need to include Comprehensive Sexuality Education (CSE) in school curricula. “In many cases, young people under 18 need their parents’ consent to access SRHR services, even though they are sexually active”. This is why it is crucial that young people receive CSE in school.

Her words were echoed by European Commission Vice-President Dubravka Šuica, who led the work on the EU Strategy on the Rights of the Child. European Parliament Vice-President Eva Kaili cited the fact that 10% of the EU’s humanitarian budget is earmarked for education in emergencies, stressing that strengthening women and girls’ rights is at the core of the European Parliament’s work. However, she also warned not to take for granted the progress made thus far and called on the Commission to take concrete action to achieve gender equality. “Gender markers should be included in all EU Programmes to track the progress made on women and girls’ empowerment”, Vice-President Kaili said.

We ask the EU to invest more funds in youth-friendly #SRHR and to make sure #CSE is incorporated in school curricula, so youth have access to adequate information about their rights and can freely decide about their future. @Burnycliam on the #InternationalDayOfTheGirl pic.twitter.com/zC9GOceWyL

Meeting with the Czech presidency

On October 12, Mwanaima intervened, together with fellow young advocates, at a breakfast roundtable exchange hosted by the Czech Presidency of the Council of the EU. The meeting gathered representatives from around ten EU member states, the European Commission, and the EEAS. During the exchange, youth could share their views with EU decision-makers, including the challenges girls face globally, also presenting their recommendations on how the EU could strengthen its support for girls’ rights. The meeting was closed by the representative of Sweden, who will take over the Presidency of the Council of the EU in January 2023.

Powerful words from Mwanaima, #EWAG22 young advocate from #Tanzania 🇹🇿 during the exchange with 🇪🇺 states.

It’s key to include comprehensive sexuality education in schools!#GirlsDecade pic.twitter.com/iK0S2qh5Fy

On Wednesday, our EWAG youth advocates met with staff from the Youth Unit of the European Commission’s DG INTPA. At the meeting, DSW youth advocate Mwanaima from Tanzania emphasised the crucial role education plays in realising SRHR for all: “In my region of Tanga in eastern Tanzania, early marriage brings prestige. So teenage pregnancies are very common – having your first child at age 14 is normal.” SRHR remains a taboo topic in her community. This is where education comes in: “Education is the first seed that should be planted in a girl’s heart to empower her to make her own decisions.” This includes, for example, education around menstruation and gender-based violence (GBV), both of which boys should receive as well.

DG INTPA staff emphasised the role played by the recently adopted Youth Action Plan (YAP) in this context. “The YAP is about respect and about power. It is about recognising young people as partners and key actors.”

“YOU are the leaders in this room” said one of the @EU_Partnerships
representatives at the meeting with our #EWAG2022 young advocates.

They stressed the need for a two-way action: young people advocating internally and the EU promoting youth rights externally.#GirlsDecade pic.twitter.com/lDMgRgFIKk

Exchange of views with the DEVE Committee

On Thursday, John Jessy and other EWAG young advocates were invited to speak during an exchange of views with Members of the European Parliament (MEPs) in the Development Committee (DEVE). John Jessy presented the challenges that girls and young people face in his native Uganda when accessing SRHR information and services, calling for increased investments in youth-friendly SRHR and in the promotion of CSE. “SRHR gives us the power to make informed decisions that can transform lives and communities so that we can achieve a gender-equal society”, he stressed.

Several MEPs intervened in the debate, thanking the young advocates for their powerful messages, and reaffirming their commitments to promote girls’ rights and SRHR as part of their work. The recording of the session can be viewed here (starting at 11:00).

“Before looking at partnerships for trade and security, let’s prioritise health, especially #SRHR – because how can we trade if we’re not healthy?”

Throughout the week, young advocates had the opportunity to meet informally with several MEPs, such as German MEPs Karsten Lucke and Pierrette Herzberger Fofana, presenting them with their recommendations on how the EU could further support and promote girls’ rights, including SRHR.

EWAG may well have come to an end, but the work of our youth advocates has not. They left Brussels to continue their advocacy work in Berlin, where they will meet partners in the framework of the World Health Summit, and will have exchanges with German decision-makers.

We thank Burnice, John Jessy, and Mwanaima for being great advocates for SRHR and girls’ rights, and for their contribution to making this year’s EWAG a great success! Read more on their priorities in the EWAG 2022 Manifesto.