World AIDS Day 2022: why there will be no end to the AIDS epidemic without equalising 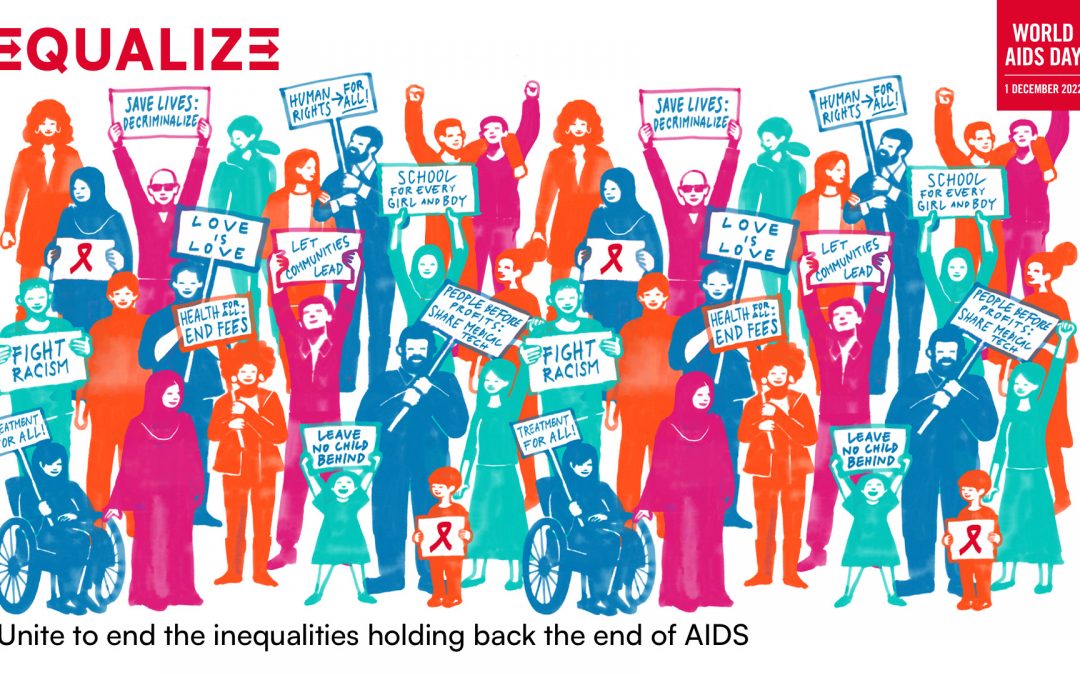 Every year on December 1, the world marks World AIDS Day. The 2022 theme is Equalise: shining a spotlight on the fact that populations in vulnerable situations, including children and young people, still often lack access to the HIV prevention, diagnostics, and treatment they need. Despite the continued decrease in the prevalence of HIV, progress has stagnated, not least due to COVID-19. Only by putting an end to the inequalities faced in accessing prevention and treatment services can we work towards reaching the UN Sustainable Development Goal of ending the AIDS epidemic by 2030.

According to the Global AIDS Update 2022 by UNAIDS, COVID-19 and other current global crises have slowed down progress in eradicating AIDS by diverting funding and disrupting health services. According to the report, someone died from AIDS every minute last year, despite the fact that effective treatments exist. Every day, 4,000 people – including 1,100 young people aged 15 to 24 years – become infected with HIV. If the current trend continues, 1.2 million people will be newly infected with HIV in 2025 – three times the 2025 target of reducing new infections to 370,000.

Low- and middle-income countries (LMICs) have struggled to respond to this epidemic as 60% of the world’s poorest countries are in debt distress or at high risk of it, and the COVID-19 pandemic has pushed an estimated 75 to 95 million people into poverty, an unprecedented increase. This means that populations who were already at a greater risk of contracting HIV and lacking access to health care are now facing even more challenges.

The global response to COVID-19 benefitted from decades of programmatic experience and scientific research on poverty-related and neglected diseases (PRNDs), including HIV. For example, research on HIV has greatly contributed to our understanding of the immune system; vaccine technologies were repurposed for the fight against COVID-19, and a global HIV clinical trial network was able to pivot to run trials during the COVID-19 pandemic – actions that also better prepare us for future pandemics. COVID-19 heralded groundbreaking scientific advancements, and these must be re-applied to HIV R&I because new and improved tools, not least an HIV vaccine, are desperately needed to eliminate AIDS once and for all. The EU should therefore mobilise additional investments in support of R&I for HIV & AIDS, including via Horizon Europe.

In order to prevent further backsliding in the global AIDS response, it is essential to eliminate the inequalities which aggravate the AIDS epidemic. As underlined by the theme of the UNAIDS campaign, we need to Equalise. Equalising means, among other things, increasing the availability and accessibility of services for HIV treatment, testing, and prevention. It also means reforming laws, policies, and practices to tackle the stigma people living with HIV as well as some key populations, such as sex workers, are facing. Equalising also consists in stepping up cooperation between researchers from the Global South and North in the research and development of new HIV tools. The European Developing Countries Clinical Trials Partnership (EDCTP3) is an excellent example of the importance of such equal partnership and should be further strengthened.

Another key factor in equalising the AIDS response and ensuring its lasting effectiveness is improving the sexual and reproductive health and rights (SRHR) of vulnerable populations, especially young people, who are at a higher risk of contracting HIV than children or adults. It is well documented that young women and girls are at a much higher risk of contracting HIV compared to young men and boys, and the decline in infections for this group is much slower. In sub-Saharan Africa, young women and girls account for 63% of all new HIV infections. At the same time, in some African countries with higher rates of HIV infections, dedicated combination prevention programmes for this group only cover 40% of the high HIV-incidence areas.

Stigma and discrimination, as well as legal barriers (such as age-of-consent regulations and laws that criminalise key populations) cause many women to avoid seeking out HIV testing and treatment services, leading to more undiagnosed cases and thus more transmission, including mother-to-child (vertical) transmission. Gay men and men who have sex with men, transgender people, people who use drugs, sex workers, and prisoners are other population groups at a higher risk with only a third of people belonging to those groups having regular access to prevention services. You can find out more about SRHR, why it is important to promote them, and how they can help us tackle the AIDS epidemic, in our new video.

Despite these growing challenges, data shows that Official Development Assistance (ODA) for HIV from bilateral donors other than the US has dropped by 57% over the last ten years. This comes as research shows a worrying increase in HIV drug resistance over the last decade, as well as the role played by HIV in increasing the risk of falling ill with TB, the deadliest infectious killer after COVID-19.

Focusing on the European Union, according to findings from the 2022 Donors Delivering for SRHR report, while jointly being the largest ODA donors globally, the EU Institutions and EU Member States are smaller actors when it comes to supporting SRHR, which includes part of the EU’s and Member States’ support to HIV & AIDS. The EU and its Member States jointly account for only 25.12% of all donors’ SRHR disbursements in 2020. Specifically, EU institutions only dedicated roughly 1.5% of their ODA to SRHR: a sign that SRHR is not a priority of the EU’s international development funding.

However, the EU has made strong policy commitments to the promotion of SRHR and the fight against HIV & AIDS, including as key components of the Gender Action Plan III, and the recently adopted Youth Action Plan and Global Health Strategy. We hope these ambitious frameworks will result in a scale-up of funding to SRHR and HIV & AIDS, and will be translated into concrete actions and programmes, with true involvement of researchers, civil society, and communities.